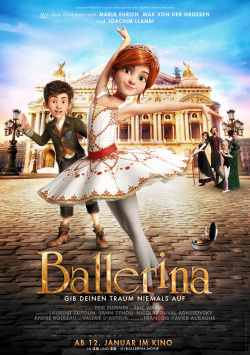 France in the 1880s: 12-year-old orphan girl F&eacute;licies (voiced by Maria Ehrich) dreams of becoming a famous dancer one day. But the orphanage is not the right place to study ballet. For that she would have to go to Paris. With the help of her best friend Victor, she actually manages to escape her nasty guardian and flee to Paris, a metropolis pulsating with life. By a lucky circumstance she even gets a place in the ballet school of the Paris Opera House. But how long can she withstand the enormous pressure of her merciless dance teacher - and how long can she keep up the lie that got her a place at the school?

Ballerina leaves you feeling somewhat conflicted. On the one hand, the story about the dancing orphan is a beautiful girl's movie that is absolutely appropriate for its target audience. F&eacute;licies is little ballet fans a really great heroine and also the images of Paris pulsating with upheaval are really beautifully animated. But what's a little disappointing is that the production itself seems completely interchangeable. The characters look like they would in any other animated film. In hand-drawn animated films, the characters somehow still had a style of their own, but since a few years ago, the computer-animated people somehow all look the same. Also the story with its twists and positive messages is nice but overly conventional.

Really a shame, though, that the makers don't trust their young viewers to like classical ballet music. Only in one scene is a little music from Swan Lake to be heard, otherwise completely inappropriate for the era in which the story is set, completely interchangeable pop songs by Sia and Co. determine the soundtrack. That sometimes such songs are used to sell the soundtrack better is quite understandable. But at least for the dance scenes they could have gone back to classical pieces, which girls would have definitely found great in this context.

Be that as it may, girls between the ages of 6 and 11 will probably not be bothered by these criticisms. They get plenty to laugh and dream about here. And also boys get their money's worth with some gags and target group-appropriate action sequences, especially towards the finale. Therefore: A surprise-poor and interchangeable, but also nice and beautifully implemented children's film. Worth seeing

Cinema trailer for the movie "Ballerina (Frankreich/Kanada 2016)"
Loading the player ...