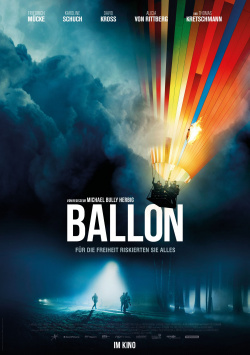 For two years, the Strelzyk and Wetzel families, who are friends, have planned their escape from the GDR to the West together. In the summer of 1979, the time has come: the families want to fly unnoticed to West Germany at night in a homemade hot air balloon. But shortly before the border, the balloon crashes. When the Stasi, led by Lieutenant Colonel Seidel (Thomas Kretschmann), finds the crashed balloon, the families realize that it is only a matter of time before they are found and imprisoned. Only one thing can help: a second escape attempt. But can they do in a few days what took two years the first time? And can what led to the crash of the first balloon be prevented at all? A nerve-wracking race against time begins.

Balloon is perhaps one of the most surprising films of the year. Surprising not necessarily in a dramaturgical sense, after all, the true story of the spectacular escape of two families from the GDR has already been filmed once by Hollywood in the early 80s. No, what is surprising is that Michael Bully Herbig presents a drama that is gripping from the first to (almost) the last second, which one would not have expected from the comedy specialist. Although - if you look at Herbig's previous directorial works, you will also already notice that he has rich technically and stylistically always delivered great cinema, even if the humor may not have always been everyone's cup of tea.

His cinematic treatment of the escape that made headlines around the world at the time really doesn't need to hide from Hollywood now. Sure, there are some somewhat clichéd characters and scenes that seem a bit overdrawn. But this doesn't really have a negative effect. Because Herbig manages perfectly to tie the viewer to the story and to draw the characters in such a way that you just have to sympathize with their fate - no matter whether some clichés are used or the outcome of the story is already known.

It's also pleasing that Herbig doesn't try too hard to move away from his image as a comedian that he would leave humor out of it altogether. He does throw in a few small laughs here and there, but they are served up in a rather subtle and backhanded manner. However, they always offer a pleasant contrast to the overall very threatening basic mood, which pushes the entertainment value even higher. A really successful visual language and a great ensemble of actors underpin this positive overall impression. The fact that at the end of a very thickly applied epilogue was added, which the film would not really have needed, is really to get over. Hats off, Bully: Your Balloon is great cinema and therefore also: Absolutely worth seeing!

Cinema trailer for the movie "Balloon (Deutschland 2018)"
Loading the player ...