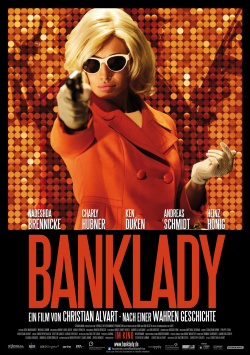 Germany in 1966: Day after day, Gisela Werler (Nadezhda Brennicke) toils away at her job in a wallpaper factory to provide at least a modest life for herself and her parents. There is not much joy or excitement in the young woman's everyday life. This changes drastically when she meets the charming Hermann Wittorff (Charly Hübner) and discovers by chance that he is robbing banks together with her friend and colleague Uwe (Andreas Schmidt). Since Uwe's nerves don't really want to cooperate, Hermann needs a new partner. Fascinated by the dark side of this man, Gisela offers to help out. After initial doubts, Hermann takes her on as his partner - with unexpected consequences. For it is not only that Gisela quickly takes a great liking to her new life. She also becomes a veritable celebrity in the media as a bank lady. But all this must not go to her head, because the investigators Fischer (Ken Duken) and Kaminski (Heinz Hoenig) are already close on her and Hermann's heels.

Based on true events, director Christian Alvart once again proves his talent for stirring crime fare with Banklady. But while Alvart's two Til Schweiger Tatort quota hits showed primarily with first-class action why he made it to Hollywood, the dramaturgical finesse is far more prominent in Banklady. Admittedly, there are some very well-crafted moments here that can definitely be described as action-heavy. But the very entertaining film is not carried by such scenes alone, but primarily by the story, which works well not only because of the real backgrounds.

Because even if the whole setting by the camera work and the coherent 60s equipment despite occasional exaggeration very authentic, it is especially the good actors who give the whole a particularly worth seeing character. Leading actress Nadezhda Brennicke embodies very credibly the young woman who is downright crushed by the narrowness of her dreary life and blossoms in the rush of adrenaline and wealth that the robberies bring her. She is given the opportunity here to completely reinvent herself and live a life she has only dreamed of. Brennicke really plays how she has changed this quite brilliantly. But Charly Hübner is also completely convincing as the bank robber with his undercooled charm. The fact that the chemistry between the two actors is so good makes them so successful as the German Bonnie and Clyde.

With the selection of his cast, Alvart has also shown a very good hand in smaller roles. The good script, which is somewhere between fact and fiction, clearly puts the character of Gisela Werler in the foreground, but not only gives Nadeshda Brennicke again and again the opportunity to shine as an actor. The other actors can also show off their skills in some very strongly written scenes. Especially when the Banklady with Commissioner Fischer delivers a cat-and-mouse game, Ken Duken also runs up to best form.

Although actors, script, camera, music and of course the direction leave a very positive overall impression over long stretches, Banklady is not a perfect film. So there are again and again small lengths, which slow down the otherwise very good pace, as well as some scenes, which seem a bit rushed and therefore also a bit superficial. But the successful moments, which include Gisela's first bank robbery, are clearly in the majority. Christian Alvart has created a very entertaining mixture of thriller, drama and romance, which may not be subtle head cinema for the feuilleton community, but which simply offers good entertainment on several levels. And for that, with only minimal deductions, there is then also an absolutely deserved: Worth seeing!

Cinema trailer for the movie "Banklady (Deutschland 2013)"
Loading the player ...