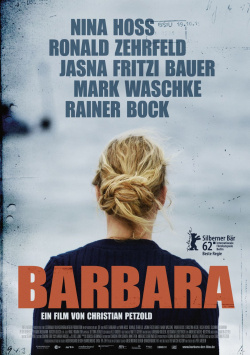 The doctor Barbara (Nina Hoss) realizes too late that it was not a good idea to apply for an exit visa. Because in the summer of 1980 she is transferred from the capital East Berlin to a small provincial town on the Baltic Sea. Here she is to work in the children's ward of the local hospital, but Barbara's mind is already elsewhere. For Jörg (Mark Waschke), her lover from the West, is preparing everything for an escape across the Baltic Sea. But until that happens, Barbara has to put up with regular visits from Stasi officer Schütz (Rainer Bock) and try to pay the appropriate attention to her patients. In contrast, she remains distant and cool towards her new colleagues. The doctor Andre (Ronald Zehrfeld), however, does not seem to be deterred by this. He obviously makes an effort to establish friendly contact with Barbara. But perhaps there is more to it than that? Perhaps Andre is an informer who could jeopardize her escape. Andre's engaging manner and the case of young worker Stella (Jasna Fritzi Bauer) begin to influence Barbara's attention and she must now do everything she can not to lose control at the last moment...

Barbara, for which director Christian Petzold was awarded the Silver Bear at the Berlinale, tries to show a somewhat different picture of life in the GDR than is usually shown in the cinema. Equipment, colours, all that is supposed to seem as authentic as the constant feeling of mistrust and the emotions of the protagonists. And Petzold, his actors and his team behind the camera really succeeded in this. With great dramaturgical restraint, but all the more expressive images, the film quickly draws the viewer under its spell. The story is exciting and moving at the same time, without sinking too much into the usual clichés.

The whole thing is carried by a great performance of Nina Hoss, who manages that Barbara never seems unsympathetic despite her undercooled nature, especially towards the charming Andre. The audience always feels for her, suffers with her during the humiliating investigations and hopes with her that she will succeed in escaping. However, this is not directly the focus of the story. To say that would be too one-sided. Rather, the story focuses on Barbara's development through her encounters with people like Andre and especially Stella (wonderfully played by Jasna Fritzi Bauer, known from Ein Tick anders) and how this changes her view of what should be her clearly defined goals. And with Nina Hoss bringing her character's inner life to the screen with tremendous conviction, Barbara works really well, despite some minor hang-ups.

Although cinematographer Hans Fromm has captured some truly engaging images of the rugged beauty of the Baltic coast, the only question in the end is whether you really need to have seen Barbara in the cinema. As gripping as Nina Hoss' performance in particular is, going to the cinema can really only be recommended to really big lovers of sophisticated arthouse drama from Germany. For all others it is enough to wait for the TV broadcast of this production made in cooperation with ZDF and arte. But then in any case: worth seeing!

Cinema trailer for the movie "Barbara (Deutschland 2011)"
Loading the player ...