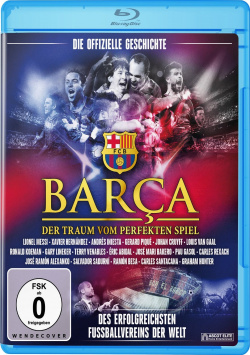 Barça - The dream of the perfect game - Blu-ray

Content: A few words in advance: I generally have a penchant for well-made documentaries. I find particularly interesting those who deal with topics that I don't really have anything to do with. If a documentary grabs me anyway, then that clearly speaks for me for the quality of the film. Football is such a topic. Big enthusiasts of the round leather and especially fans of FC Barcelona may forgive me if there are some expert mistakes or omissions to be found in my discussion. But at the core it's all about one thing: Is "Barça - The Dream of the Perfect Game" a successful documentary about one of the most famous football clubs in the world? And even a layman like me can clearly answer this question with "yes".

With many interviews for which former players and coaches, as well as contemporary witnesses could be won, as well as a wealth of archive material, filmmaker Jordi Llompart has staged a gripping and entertaining journey through the history of FC Barcelona. From their founding in 1899 by the Swiss Hans Gamper to their first successes, their first legendary players, their relegation in the 1960s, their eternal rivalry with Real Madrid and their recent successes with coaches like Pep Guardiola and players like Lionel Messi. In addition to the many informative interviews, there are also scenes from unforgettable games, grandiose victories, but also from bitter defeats to see. At the same time, the film also tries to make clear what enormous pressure for success lies on the players and how they deal with it. It will also show how the youngsters are recruited and why players and fans love this club so much.

It is clear that "Barça - The dream of the perfect game" is first and foremost a great declaration of love to FC Barcelona. What makes the documentary so interesting, however, is that it doesn't leave out failures and critical voices and generally addresses the dark sides of professional football - even if these are of course only dealt with marginally. Thrilling game scenes and rare archive material also make the film a real celebration for fans. But even a non-soccer/FC Barcelona fan will be entertained here for two hours, because the history of the club with its ups and downs and the very special philosophy of its founder is also very interesting apart from the playful side. Therefore there is a very clear point for this sports documentary: Absolutely worth seeing!

Picture + sound: The Blu-Ray image is absolutely clean and has a very good overall sharpness, which also highlights smaller details. The colour scheme is very atmospheric, which is especially evident in the more recent game excerpts and interviews. With some older archive recordings there are some qualitative deficiencies, which are however simply owed to the time and therefore cannot be evaluated negatively. The DTS-HD 5.1 Mix provides a lot of movement on the surround channels in some scenes, but primarily transports the interviews and voice over comments out of the speakers in a way that is easy to understand. Good.

Extras: As a bonus the disc has four detailed bonus interviews with the recently deceased coach Johan Cruyff (ca. 13:02 min.).), the former player and coach Carles Rexach (ca. 12:18 min.), as well as the players Gary Lineker (ca. 11:25 min.), Xavi Hernández (ca. 13:32 min.). In addition there is the trailer for the film and further program tips.

Fazit: "Barça - The Dream of the Perfect Game" is a comprehensive and very interesting documentary about the history of FC Barcelona and its legendary players. Interviews with many players, excerpts from legendary games and rare archive material make the documentary a must for fans. The Blu-ray presents the documentary in good picture and sound quality and also has some detailed bonus interviews on board. Altogether there is a clear one for it: Recommendable!