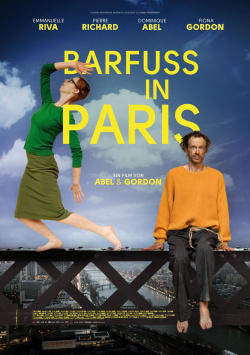 For decades Fiona (Fiona Gordon), librarian from a small town in Canada, has not seen her aunt Martha (Emmanuelle Riva) since she emigrated to Paris. But when she receives a letter from Martha, she sets off for France only to discover that her aunt has disappeared. Now a crazy search across Paris begins for Fiona, in which she first loses all her belongings before she meets the homeless Dom (Dominique Abel). And with this begins for her a confusing, crazy, but also seductively sensual time in the city of love…

Fiona Gordon and Dominique Abel, who, together with Bruno Remy, have already made the films "Iceberg", "Rumba" and "Die Fee". have staged together in front of and behind the camera, in "Barefoot in Paris" the taciturn humour of a Jacques Tati is again wonderfully mixed with almost avant-garde dance choreographies, which would have given Pina Bausch great pleasure. Physical comedy with obvious borrowings from great masters of the past is mixed with very own, very modern ideas to a wonderfully colorful burlesque, which is enriched with lovingly imperfect, but playfully imaginative effects.

The charming naivety, the unrestrained desire to try out and the wonderfully abstruse comedy make this film a very special viewing experience. Admittedly, the duo's idiosyncratic style doesn't quite want to work for over 90 minutes. Some aspects seem a bit overused after a while. But somehow it's hard to blame the movie, because it obviously has only one goal: to make the audience happy.

And that's also possible because the imperfect is celebrated here. Because not only the effects are consciously implemented imperfectly. The characters in the story are also not particularly beautiful on the outside and show a certain social incompetence. But they all, like history, radiate such a lightheartedness and joy of life that this can only be described as beautiful. Barefoot in Paris" is certainly not a film for a broad mainstream audience. In the very special way in which Gordon and Abel tell their story, you have to get involved in order to succumb to the magic of the film. Those who succeed in doing so will be rewarded with an enchanting cinema fairy tale and a wonderfully playful, very funny production. And that's clearly one thing: Absolutely worth seeing!