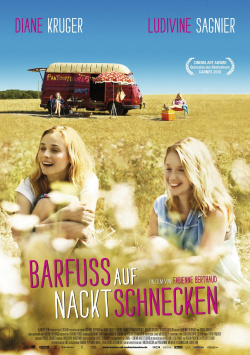 Clara (Diane Kruger) leads an orderly life in Paris, married to a lawyer and enjoying the comforts of city life. Her sister Lily (Ludivine Sagnier) is quite different. She still lives in her mother's house in the country and has built her very own fantasy world there. Lily knows no rules, she just does what she feels like. But when her mother suddenly dies, Clara knows that Lily won't be able to make ends meet on her own for long. So she treats herself to some time off and moves in with Lily in the country. Before long, her sister's idiosyncratic lifestyle rubs off on Clara as well, and she begins to question the meaning of her ordered existence.

Director Fabienne Berthaud has directed Barefoot on Slugs with high ambitions. The core of her story, bathed in very beautiful imagery, is a beautiful one. But unfortunately, the director tries too cramped to live up to a certain artful claim, so that the staging at times seems a bit too forced and the message is too penetratingly drilled into the viewer. This is especially noticeable in the character of Lily, who Berthaud clearly seems to care deeply about. She gives this character so much room to act out her otherworldly childish naivety that this quickly ceases to be fascinating and engaging to the viewer, and instead becomes extremely annoying and exhausting.

However, the grand plea that one should not be imprisoned by societal constraints and should completely enjoy every moment is all too obvious after only a few moments. It would have been nice if the whole thing had been presented a little more subtly and perhaps scrutinized a little more critically. Because even if Barefoot on Slugs is a cinematic fairy tale and reality shouldn't be questioned too much, in the end you are left with the feeling that an idyll is presented here, which even if you move outside of societal norms, can certainly hardly be achieved that way. The world doesn't become colorful and beautiful just because you see it through a child's eyes. Everyone is allowed to dream of that, of course, especially in cinema. But since some aspects of Lily's as well as Clara's behaviour can't really be judged positively from a purely human point of view, which is excused here with the life beyond the norm and the urge for freedom, a somewhat sallow aftertaste remains.

The two leading actresses can't be blamed. Both Ludivine Sagnier and Diane Kruger play their roles with dedication and a believable love for their characters. But good actresses and beautiful pictures don't make a good movie. If you thought that Sally Hawkins' permanent cheerfulness in Happy-Go-Lucky was too much of a good thing, you will be annoyed by Lily, the headstrong artist soul who is simply not of this world, after only a few minutes. It's a shame, really, because both the story and the actresses' work deserved better - and so did the audience!

Cinema trailer for the movie "Barefoot on Slugs (Frankreich 2010)"
Loading the player ...