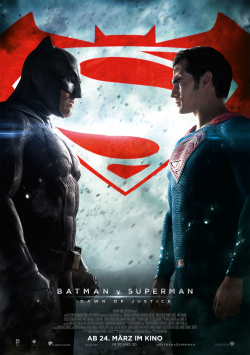 Superman's (Henry Cavill) battle with Zod (Michael Sheen) has brought much suffering and destruction to Metropolis. Still, to many, the Man of Steel is a hero. But one doubts that Superman is indeed the great savior. For Bruce Wayne (Ben Affleck), the dark knight of Gotham City, Superman is no hero. To him, he is a danger that must be eliminated at all costs. And so he prepares for the ultimate duel, which he hopes to win with the help of Kryptonite. But while the two superheroes are at each other's throats, they completely overlook the fact that Lex Luthor (Jesse Eisenberg) has a perfidious plan that could destroy them both for good and bring even more destruction and death to Metropolis, Gotham and the rest of the world. To stop Luthor, the two would have to join forces - but it seems to be long too late for that.

Batman v Superman: Dawn of Justice is the sequel to Zack Snyder's Man of Steel, which flushed over $650 million into the worldwide box office three years ago. Snyder will need to significantly surpass that result if the clash between the two superhero legends is to be a financial success. The signs are good, because the interest in a duel between Superman and Batman is extremely high. In addition, the film is really successful over large parts. Ben Affleck, who was often scolded in advance, does a really good job as the aging, disillusioned Bruce Wane/Batman. Especially the opening sequence, which establishes very vividly why Bruce Wayne hates Superman, can convince all along the line. And even otherwise Affleck quickly makes you forget the not really positive impression he left as Daredevil.

The fact that the film shows what negative consequences Superman's heroic deeds can have adds a whole new facet to the story that sets it apart from previous adaptations of the popular comic book hero. Snyder has succeeded in stripping Superman of his halo without demystifying him as a hero. Rather, he also allows the viewer a glimpse of the darker side of the son of Krypton, which is especially evident in a dystopian vision of the future. Anyway, Batman v Superman: Dawn of Justice is overall a very serious, dark and brutal superhero movie. And that's exactly what could become a problem for some viewers. Unlike recent Marvel heroes Deadpool or Ant-Man, this movie - with a few minor exceptions - takes itself pretty damn seriously. It's exciting and action-packed, but it's not really fun in the classic sense.

And especially towards the finale, this creates some moments of unintentional comedy embedded in a jumble of extreme CGI bluster and overly quick cuts. As with Man of Steel, less would clearly have been more in the final third of the film. There's no question that the special effects are, with minor detractions, great. The action sequences during the titular duel are top notch. But at some point it just becomes too much of a good thing, when the action is always kicked up a notch and the whole thing happens at a pace that the normal human mind can hardly follow (or wants to). At the end Snyder tries to build up a big emotional climax, which is celebrated extensively. The problem is that almost every fan should know that what happens here will be undone in the upcoming Justice League movie at the latest. And as a result, this entire sequence feels far too extended and almost unnecessary.

There's a lot to criticize about Batman v Superman: Dawn of Justice. Jesse Eisenberg as Lex Luthor, for instance, can only really convince in a few moments. And a little more humor would have done the film good in places. But overall, Zack Snyder has staged great popcorn cinema with great visuals, which should please fans of the DC universe. While most members of the upcoming Justice League - like Aquaman or The Flash - only have very short mini-appearances, Gal Gadot gets to prove that she was a very good choice for the role of Wonder Woman. You can already look forward to her own film, which will be released in 2017.

But not only connoisseurs of the comic book template, also all who generally enjoy great fantasy spectacles, should not miss this ultimate superhero battle. Certainly not a perfect film and also not one of the best comic adaptations of recent years. But in any case entertaining entertainment cinema with some quite great moments and therefore also despite small deductions in the B grade: Absolutely worth seeing!