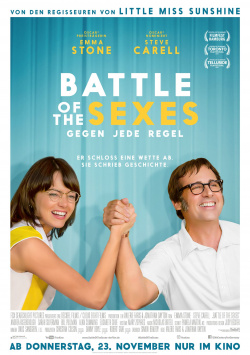 Battle of the Sexes

USA 1973: The women's rights movement has already achieved a lot. But in sports, it doesn't seem to have caught on yet. Although Billie Jean King (Emma Stone) is number 1 in the world rankings in women's tennis, she is fobbed off with just one-twelfth of the prize money for men. The athlete doesn't want to put up with that any longer. Together with other greats of women's tennis, she organises the Virgina Slims Tour, in which women are able to dictate the financial conditions themselves for the first time. This generates a lot of media interest - something former tennis champion Bobby Riggs (Steve Carell) could use all too well. And so he challenges Billie Jean to a match that will prove once and for all that men are the dominant species in sports. At first, the dedicated women's rights activist refuses - but she soon realizes that she can't begrudge Bobby Riggs and all the other men this triumph. And so it comes to one of the most memorable sporting events in TV history - the Battle of the Sexes .

Eleven years ago, Valerie Faris and Jonathan Dayton scored a surprise hit with their feel-good comedy Little Miss Sunshine, to which almost all American indie comedies are still compared. Yet the duo have only directed one other film since then. Despite an original initial idea and good reviews, the unusual RomCom Ruby Sparks failed to find an audience nearly as large as the two-time Oscar winner Little Miss Sunshine. Whether that was the reason why it took another five years for the two to now deliver their third feature film directorial effort with Battle of the Sexes remains to be seen. The fact is that Valerie Faris and Jonathan Dayton have once again directed a very nice film that not only has some very amusing moments, but also deals with a topic that is unfortunately still all too relevant.

Because sexism is still evident in almost everywhere today - though perhaps not quite as obvious as it was in the early 1970s. What Billie Jean King and the other female athletes had to deal with back then may seem a bit exaggerated from today's perspective, and one is inclined to say that, thankfully, things have all improved. But when you think about it, it quickly becomes clear that improved doesn't mean that there is real equality everywhere. Thus Battle of the Sexes deals with an important and topical issue - but it does so in a way that thankfully comes across as neither doctrinaire nor too melancholy.

With a set, color scheme, and soundtrack that evoke a perfect '70s feel, Faris and Dayton have staged a rousing as well as amusing battle of the sexes that - though the outcome may already be known to many - is gripping and extremely entertaining until the very end. Steve Carell is great as the macho bully. Although he lets off a lot of extremely sexist lines, Faris and Dayton have not degraded him to a one-dimensional bogeyman of the women's movement. This is important in that it adds an emotional layer to the match against Billie Jean King. By making the viewer realize that Riggs is not just about stroking his male ego, an additional arc of tension is built up that makes the audience in front of the movie screen root for him almost as much as the American television nation did at the time.

Cinema trailer for the movie "Battle of the Sexes (USA 2017)"
Loading the player ...