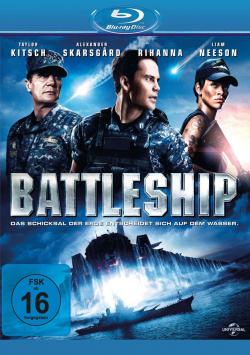 Movie: The fact that especially big Hollywood studios like to play it safe with potential blockbusters and thus a certain unimaginativeness in the selection of material becomes apparent, should no longer be a secret due to the countless sequels, remakes and reboots. But the fact that a game like Battleship is now being used as a template for a movie sounds like the height of uninspired filmmaking so far. But fear not: in Battleship, the actors don't sit across from each other for two hours shouting coordinates at each other. Rather, director Peter Berg (Hancock) takes the basic idea of the game and has crafted a story around it that allows him to really let it rip in the best Transformers fashion.

After his brother forces him to join the U.S. Navy, Alex Hooper (Taylor Kitsch) makes a surprisingly fast career there. But his quick-temper and relationship with Sam (Brooklyn Decker), the daughter of his superior admiral (Liam Neeson), increasingly stand in the way of his advancement. When Hooper clashes with Chinese Captain Yugi Nagata (Tadanobu Asano) during an international naval maneuver, his days in the Navy seem numbered. But then the situation changes dramatically when Earth is attacked by aliens and Hooper's ship becomes the last hope against the aliens' seemingly invincible fighting machines...

One thing can be said right away: if you liked the Transformers movies, you will certainly enjoy Battleship as well. However, especially viewers outside the USA have to get used to the fact that this game adaptation is dripping with pathos and especially in the first half hour it seems like an advertising film for the US Navy. But if you can put up with that, you're in for some thoroughly entertaining popcorn fun that doesn't provide fodder for the intellect, but for the eye.

What Berg has managed to do very well, unlike Michael Bay, is to keep breaking up the action with some humor. This was one of the biggest criticisms of the Transformers movies, where the humor was very infantile and silly. Battleship, on the other hand, has some really amusing moments to offer, especially at the beginning. For example, the opening sequence, which shows the original way in which Alex has won the heart of the beautiful Sam, but also his cramped attempts to ask her father for his daughter's hand in marriage, offer some pretty good laughs.

Admittedly, although it is clear to see that they are giving their best, the actors hardly come up against the effects battle and the rather thin script. Liam Neeson is great as the always bad-tempered Admiral, but is used far too infrequently to really make an impression. Taylor Kitsch (John Carter) is quite convincing as a hero against his will. But given the rather thin story, there is little opportunity for him to imbue his character with depth of character. And Brooklyn Decker, who was already primarily allowed to please the male eye in the Adam Sandler comedy My Invented Wife, gets that role thrust upon her again in Battleship. All other actors, among them True Blood star Alexander Skarsgård or singer Rihanna, play rather subordinate roles, stand out neither particularly positively, nor really negatively.

The real main role, however, plays admittedly the special effects. And even if there are small weak points to discover here and there, they can still convince on balance fully and offer some real show values. Although the whole thing comes, similar to the Transformers, cut very fast and a bit overloaded. But the entertainment value this harms only minimally.

When Americans and Japanese have to join forces in front of the backdrop of Pearl Harbor to fight against aliens and when at the end it is proven that the advertising slogan Because new technology is better is not always true, then this makes despite quite a few clichés, exaggerated patriotism and shallow dialogues in the end but really a lot of fun. Battleship may not be great head cinema, not sophisticated entertainment, but pure fun cinema. If that's what you're looking for and can overlook the aforementioned weak points, you can confidently aim for the Blu-Ray player and pop the disc in: hit, sink, worth seeing!

Picture + Sound: Technically, the film is much stronger than it is in terms of content, which is also noticeable in the Blu-Ray's conversion. Detail is great, with perfectly matched black levels supporting the decent image depth. Colors are vibrantly realized and the visual effects are coherently integrated into the real-life environments. The sound is also convincing all along the line, whereby the good mixing of the dialogues is of course absolutely secondary. Here, the great sound effects are in the foreground, which really let it rip in the DTS-HD 5.1 mix. Your neighbor will thank them!

Extras: The German Blu-Ray of Battleship is in contrast to the US version in terms of bonus material a little slimmed down. Unfortunately, we have to do without the picture-in-picture commentary by director Peter Berg, which is enriched with many storyboards, behind-the-scenes moments and interviews. Instead, there are short documentaries worth watching about the adaptation of the popular game and the preparations for the shoot (approx. 11 min.), the cast (approx. 12 min.), the problems of shooting on ships and on the water (approx. 6 min.), about the director (approx. 6 min.) and finally about the visual effects (approx. 11 min.). Although these featurettes are all quite short, overall they provide a pretty good and, more importantly, entertaining look at the production.

Finally, the Blu-ray has an alternate ending in the pre-visualization stage (approx. 7 min.), as well as an extensive tour of the USS Missouri (approx. 20 min.) to offer. Good!