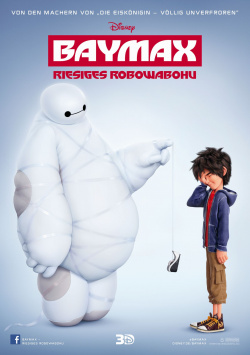 After Spider-Man, the X-Men, the Avengers or the Guardians of the Galaxy, the next superhero from the almost inexhaustible MARVEL universe comes into our cinemas. But this one doesn't seem superhero-like at all. He is cuddly, soft, extremely polite and always helpful. His name is Baymax. Baymax is an inflatable care robot made of soft vinyl. He was invented by Tadashi, the older brother of the no less talented tinkerer Hiro Hamada. When Hiro's development of telepathically controlled mini-robots earns him a place at the San Fransokyo University Institute of Technology, the boy can't believe his luck. Together with Tadashi and his colleagues, he will be able to work on projects that will change the world in the future. But a catastrophic explosion that destroys the institute and kills Tadashi shatters all those dreams. Hiro falls into a deep hole and decides to quit his studies. But then an unimagined threat comes to town that only Hiro can stop. To do so, however, he needs help - and he finds it in the form of Tadashi's robot Baymax.

Baymax - Huge Robo-Baboo is based on the Marvel comics Big Hero 6, but adapted very freely for this animated adventure. The result is a successful fusion of the best elements of Disney and Marvel. There's plenty of humor, great action, something for the heart, and quite a bit of fodder for the eyes. The fictional city alone, a combination of Tokyo and San Francisco, is so filled with an attention to detail that it's nearly impossible to discover everything on the first viewing of the film. However, it's to the creators' credit that they managed to keep the story and its characters from being completely overwhelmed by the images and pushed into the background. The film takes its time to elaborate especially the character of Hiro and his unusual friendship with Baymax. This also breathes real life into the robot despite the lack of facial expressions, making him one of the most endearing heroes of the still very young cinema year.

Although the film is of course aimed more at a young target audience, the makers do not shy away from making the story a little darker, a little sad and even a little profound at some points. But since they always use slapstick and delightfully over-the-top humor in just the right places, the whole thing never really runs the risk of becoming too depressing, scary or dramaturgically heavy for young viewers. Directors Don Hall (Winnie the Pooh) and Chris Williams (Bolt: A Dog for All Seasons) find a good mix of humour, which is also pleasantly ironic about the whole superhero universe, and child-friendly suspense that adult viewers can definitely get carried away with.

The team of super-nerds that Hiro and Baymax rally around to face the sinister threat also contributes significantly to making the film so much fun. Fred, in particular, dubbed by singer Andreas Bourani in the German version, provides some good laughs and, after the credits roll, one of the best post-credits scenes in Marvel history. So fans of the Marvel comics should definitely stay seated until the very end.

However, as nicely drawn as the anti-heroes are, as amusing as their battle against the mysterious villain is, the central hero of the film is of course Baymax. As soon as he shows up, the fun factor of the animated adventure skyrockets. The fine work of Bastian Pastewka, who lends his voice to the robot in the German version, must also be highlighted here. It is almost impossible not to immediately take the gentle, good-natured and extremely funny Baymax to heart. This also gives the finale a lot more power on a number of levels. Even if the last act in particular is a little reminiscent of the wonderful animated film The Giant from Outer Space and could have happily been a little less predictable, the emotional impact is undeniable.

Admittedly, the second half in particular threatens to descend into chaos at times. This is where the charm of the story, built up especially by the quieter scenes between Hiro and Baymax, gets a little lost. Still, in the end, you're left with a thoroughly positive overall impression. Disney has again managed to create perfect entertainment for the whole family, where children as well as older animation fans get their money's worth. An exciting as well as funny fantasy adventure, which is introduced by one of the most adorable and cute short films of the last years. Dog lovers in particular should not miss the Oscar-nominated short film Love Goes Through the Stomach! So get to the cinema on time and stay seated until after the credits, because here you really get your money's worth before, during and after the main film. Absolutely worth seeing