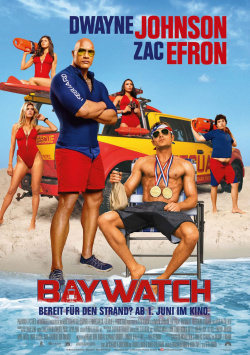 Mitch Buchannon (Dwayne Johnson) has his beach as the boss of Baywatch fully under control. He and his team not only take care of drowning victims or minor injuries and sunburns, but also of many a crime committed here - even if it is a thorn in the side of the police. Just in time for the recruitment of new Baywatch recruits, however, Mitch is about to get an overdose of problems: Not only is he saddled with two-time Olympic champion and self-absorbed big shot Matt Brody (Zac Efron) for image reasons. On top of that, packets of a new designer drug turn up on his beach. With the cops doing nothing, Mitch takes the investigation into his own hands. When there is a first fatality, a scapegoat has to be found - and that is Mitch of all people.

The TV series Baywatch was a real phenomenon. Eleven seasons with 243 episodes were produced between 1989 and 2001, making actresses like Erika Eleniak, Nicole Eggert, Carmen Electra and, of course, Pamela Anderson international sex symbols. Of course, no one has seen the series - but really everyone has known it. Skimpy outfits, the obligatory racing in slow motion and shallow storylines were the hallmarks of the series, which in its very own way thoroughly deserved the label cult. There has long been speculation about a revival on the big screen. Yet it was never quite clear what that should look like. Should the style of the series simply be modernized, should the well-known actors slip back into their roles, should the whole thing be an action flick or perhaps rather a comedy.

If you look at the film by Seth Gordon (Kill the Boss), you could almost think that the makers could not decide one hundred percent until the end, how the new Baywatch should look. Sure, at first glance, the whole thing is a comedy, a tongue-in-cheek satire in the style of the 21 Jump Street movies. And aside from the fact that too many of the gags happen below the belt, which is just boring by now, the comedic part of the movie works quite well. There are some very good laughs and whenever some peculiarities of the series are taken for a ride in a tongue-in-cheek way - like the sometimes already quite absurd plot lines - then it's really funny.

On the other hand, however, the feature film also tries to be a bit of an action thriller. And since humor is surprisingly almost completely missing here, it just doesn't quite want to work. For example, when the good friend of one of the main characters dies, it's supposed to be emotional - but it's not. On top of that, in too many scenes it's clear that they were shot in front of a green screen and not actually on the water. So this action aspect of the big screen adaptation comes across as rather unintentionally comical - quite different from the way the aforementioned 21 Jump Street movies were. There, the guest appearances of former series actors were incorporated much more cleverly than is the case here - even if fans will be very happy about a reunion with two of the most famous actors of the series.

No question: The Baywatch movie is something for the eye - and not only for the male audience. Zac Efron and Dwayne Johnson flex their muscles again and again, while Alexandra Daddario and Kelly Rohrbach can be seen in very skimpy outfits - which is fortunately also offered with a good portion of self-mockery. Besides the eyes, the laugh muscles also get their money's worth, at least in stretches. That's enough for a quite enjoyable visit to the cinema. Who expected more from a Baywatch movie will be bitterly disappointed. A little more bite and less genital jokes and this comedy could have been really good. So Baywatch is only quite entertaining - but by far not as bad as many critics think. And therefore there is also - of course in neat slow motion - still a neat: S e h e n s w e r t!