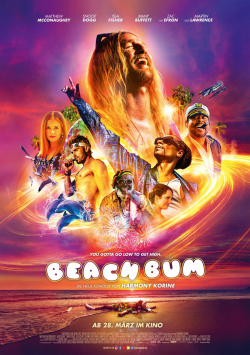 If the term bon vivant applies to anyone, it's Moondog (Matthew McConaughey). The poet lives into the day in the Florida Keys, intoxicated by booze, drugs and beautiful women. He doesn't care about convention - and that's exactly why his wealthy wife Minnie (Isla Fisher) loves him. Things couldn't be better for Moondog - until an accident takes Minnie from his life. Moondog doesn't get her fortune, though. Unless he finally finishes his new book, which he's been planning for many years. For Moondog, this is the beginning of a madcap attempt to continue enjoying his life in such a carefree way, which brings him into contact with quirky contemporaries and causes him to experience truly crazy things.

Beach Bum is the new film from Harmony Korine, who most recently underpinned his status as a cult director - at least among his admirers - with Spring Breakers. The story of perpetually stoned poet Moondog is again weird and maladjusted, but much more accessible and not quite as annoying as Spring Breakers. What both films have in common, though, is that many viewers who don't think the idiosyncratic filmmaker's style is great will wonder what the hell it's all about. Because although there is something like a story here, the narration is rather episodic and also a little bit confused. This may fit to the character of Moondog, but is also a little bit exhausting for the viewer.

After all: a few really amusing scenes and especially the play of Matthew McConaughey make the film quite entertaining at times. But as much as it is fun to watch the actors in their good-humored escapades in front of a wonderful scenery, the whole thing can also be tiring in the long run. Because neither the story nor the characters show any real development. However - and this has to be said quite clearly - nobody who likes Harmony Korine's style will be bothered by this. Credit must be given to the filmmaker for managing to make a comedy that is clearly more in line with mass tastes than his last few films, without betraying his very own style of storytelling.

In this respect, Beach Bum definitely has the makings of a cult film, at least among Korine fans. It's a very quirky piece of work starring a splendid Matthew McConaughey that will be a lot of fun for its target audience. For viewers who have rather adjusted to conventional comedy fare, the whole thing is then but a little too bulky and exhausting. And therefore there is also only one: Still worth seeing with cutbacks!