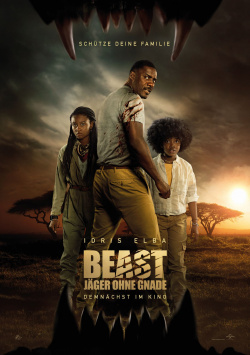 To rebuild a closer bond with his daughters Meredith (Iyana Halley) and Norah (Leah Jeffries) after his wife's death, Dr. Nate Daniels (Idris Elba) travels with the girls to their late mother's homeland: the South African savannah. There, they plan to visit a game reserve with Martin Battles (Sharlto Copley), an old family friend. But the trip quickly turns into a real nightmare, because a bloodthirsty lion is rampaging here, apparently targeting humans after poachers wiped out his entire pride. For Nate, there is now only one goal: He must protect his daughters from the dangerous animal, while also fighting for his own survival....

"Beast - Hunters Without Mercy", the new film by "Everest" director Baltasar Kormákur, is at least in parts quite entertaining survival thriller, which can score with great landscape shots and some successful moments of suspense. The fact that the lions - and especially the dangerous antagonist of Nate and his family - were completely animated on the computer is noticeable, but is only really disturbing in some scenes. The script with its arguably clichéd family conflicts has a much more negative effect on the entertainment value.

Even in the first half of the film, the action is dominated by long-winded dialogues and annoying arguments. It's hard to develop any really deep sympathies for the main characters - especially since the lion's behavior, which they then have to fight the rest of the film, is not entirely incomprehensible. Unfortunately, even at these points the script is not strong enough to make the obvious criticism of poaching and other human misbehavior towards animals and nature more intense and cleverly integrated into the story. As already the family conflicts, this theme is also implemented arg striking and superficial.

Who can do without dramaturgical depth and is not bothered by very stencil-like drawn characters, which gets especially in the second half as already mentioned really good genre entertainment. Because ultimately "Beast - Hunters Without Mercy" delivers to its audience exactly what you expect from such a film - no more, but also no less. Even if the film does not have nearly the stuff to become a classic like "The Great White Shark", Baltasar Kormákur has succeeded on balance a worth seeing contribution to the animal survival thriller genre.

Cinema trailer for the movie "Beast - Hunters Without Mercy (USA 2022)"
Loading the player ...