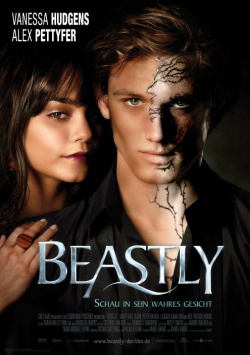 After female teenagers have been discovered as a target audience for the fantasy genre, not least through the Twilight films, it was only a matter of time before the fantastic love story of Beauty and the Beast was also modernized for the teenage target audience. The result is called Beastly, a completely harmless film adaptation of the bestseller of the same name by Alex Finn.

The world belongs to the beautiful. At least that's what Kyle Kingson (Alex Pettyfer) firmly believes. His high popularity at his school certainly seems to confirm him in his arrogant assumption. He treats his classmates with little respect, and anyone who isn't allowed to call himself Kyle's friend is even treated downright cruelly by him. Even the eccentric Kendra (Mary-Kate Olsen) is always a victim of Kyle's ridicule and public humiliation. Too bad Kendra takes up witchcraft and unceremoniously puts a curse on the dapper youth. His outward beauty gives way to an appearance more suited to Kyle's rotten character. If he does not succeed within a year that a girl expresses her love to him despite his disfigured appearance, he will never get his beauty back...

For his second feature film director Daniel Barnz could gather with Alex Pettyfer (I am number four), Vanessa Hudgens (High School Musical) or Neil Patrick Harris (How I met your mother) some attractive young stars in front of his camera. Accompanied by a soundtrack suitable for the target group, the stars are then allowed to fight their way through a script that tells the story without any rough edges. Flat dialogues, unspeakable clichés and wooden actors should also make it difficult for the target audience to be charmed by this fairy tale.

Only Neil Patrick Harris can provide some good moments as a blind tutor. But these are drowned in the jumble of campy self-discovery ramblings of an unlikable main character to whom Alex Pettyfer can barely add depth. That Kyle has only become such a puke because he lacks Daddy's attention is hardly believably portrayed. Nor does the love that slowly develops between the disfigured Kyle and model student Lindy (Vanessa Hudgens), who is of course such a good person that she takes care of homeless people in her spare time, give rise to any romantic tingles.

Maybe the perfunctory and somewhat loveless production, culminating in a frantically dispatched finale, is no real impediment to girls 16 and under losing themselves in endless pining here. It may be that the attractive actors, the soundtrack and the poetry album romance are enough to guarantee fans of the book a nice visit to the cinema. And they should be granted that, then. But even with a lot of good will, Beastly just doesn't qualify as a good movie. Shallow clichés and an uninspired production nip any good ideas, which can definitely be discovered in the story, in the bud. Those who couldn't find a good thing in the Twilight movies so far will appreciate the existing qualities of the vampire romance after Beastly. Therefore: really only for very big fans of the novel just worth seeing!