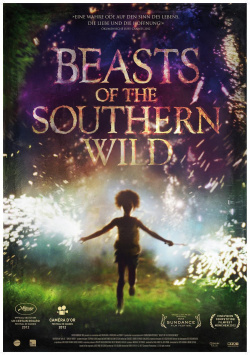 Beasts of the Southern Wild

In the bayous behind the levees that are supposed to protect New Orleans from a flood, lies Bathtub (in German: die Badewanne), a small settlement deep in the swamps where outcasts from society have built their very own existence. Little Hushpuppy (Quvenzhan&eacute; Wallis) also lives in the Bathtub with her father (Dwight Henry). Her perpetually drunk father can offer Hushpuppy no support, no answers to the many questions that plague the little girl. Rather, the man, bitter since the death of his wife, tries to make his daughter understand that he, too, will die someday and she will be on her own. And this day could come sooner than expected. For Hushpuppy's father is very ill. In addition, a storm of the century is also threatening the region, which, Hushpuppy is convinced, will also bring with it a horde of prehistoric monsters that have been freed from the eternal ice by climate change. The end seems near, and yet Hushpuppy, no more than the other inhabitants of the Bathtub, wants to leave their home and give up hope for a better future.

With his first feature film, Beasts of the Southern Wild, filmmaker Benh Zeitlin, a founding member of the artist collective Court 13, has joined with other members of the collective to direct a fascinating but somewhat unwieldy art film. It takes an imaginative yet unflinchingly realistic look at the world beyond the levees of New Orleans, a region where its own parallel society clings to centuries-old culture and traditions. In the fictional Bathtub, people live marginalized from society. Poverty and alcohol determine life here. The danger of a natural disaster hovers omnipresent over the people who live here. And yet they have retained their will to live. They use every opportunity that presents itself for a spontaneously called holiday and love their region. The fact that they don't want to leave their little world even when they are ordered to do so by the government after a flood is therefore quite understandable.

In the midst of the barren bayou settlement lives little Hushpuppy, who acts as narrator through the film. She moves with imagination in an almost fairy-tale way through a world dominated by desolation, destruction and poverty. How she sees and comes to terms with the loss of her mother, the impending death of her father and the destruction of her home in her own unique way is really quite a special film experience, thanks to the artful staging and the enormously strong and authentic acting of new discovery Quvenzhan&eacute; Wallis.

On the other hand, the excessive use of the very shaky handheld camera look seems a bit exhausting. Why this seems to be almost part of good manners, especially in arthouse films, remains a real mystery to me, as especially Beasts of the Southern Wild has wonderful and extremely strong images to offer in its visually calmer moments, which lose much of their magic when the camera shakes frantically back and forth. Sure, it's purely a matter of taste whether you like this style or find it rather exhausting. But the fact is, it's the moments when the camera quietly captures the action that are memorable.

Beasts of the Southern Wild is definitely a special film. Certainly too special for mainstream audiences, as the way Zeitlin tells his story often defies common viewing habits. But if you have a soft spot for artful independent cinema from the USA, if you like to cross the border between reality and the surreal and just want to experience something quite unusual, this American surprise success can definitely be recommended to you. Worth seeing

Cinema trailer for the movie "Beasts of the Southern Wild (USA 2012)"
Loading the player ...