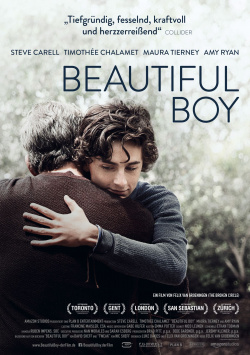 David Sheff (Steve Carell) and his son Nic (Timoth&eacute;e Chalamet) have always had a very special relationship, one of friendship, respect and trust. But seemingly unnoticed, there came a point where Nic slipped away from his father. Now he is addicted to drugs and lets intoxication, lies and breaches of trust direct his life. David, a successful journalist, wants to learn to understand his son so he can help him. But it seems unlikely that he will get his old Nic back. Is there even a way out of the drug quagmire for the boy?

Beautiful Boy is based on the two autobiographical bestsellers by David Sheff and Nic Sheff. The drama marks the U.S. debut of director Felix van Groeningen, who was nominated for a Best Foreign Language Film Oscar for his excellent The Broken Circle. And unfortunately, the Hollywood influence is clearly felt. There is little left of the sometimes somewhat idiosyncratic style that made up his previous films in this rather conventional drama. This is not to say that Beautiful Boy is a bad film. Not at all. But especially when compared to The Broken Circle, a lot of emotional potential has been wasted. That's just a shame, because the Flemish filmmaker has already proven that he can deliver especially difficult material extremely powerfully.

Beautiful Boy does have one very strong element though and that is its actors. Timoth&eacute;e Chalamet, who has been in the premier league of Hollywood young stars since his role in the critics' favorite Call Me By Your Name, is just as convincing as the drug-addled trophy son as Steve Carell, who usually subscribes to more comedic roles. He believably embodies the loving father who just wants to understand what is happening to his son and would do anything to help his boy. The two actors carry the film, but even they struggle to really pull the audience in. Julia Roberts did a much better job of that in the very similar Ben is back recently.

Felix van Groeningen has turned David Sheff's and Nic Sheff's books into a drama about unwavering fatherly love and indefatigable hope that is well acted and in places very well directed, but in the end falls short of its potential, especially on the emotional level. A good, but not very good movie. But there is still a decent: Worth seeing!