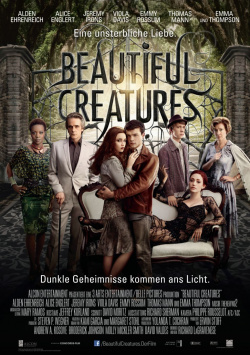 After the huge successes of Harry Potter, the Twilight saga and The Tribute to Panem, it's hardly surprising that more fantasy books for young people are finding their way onto the big screen. And so it was only a matter of time before Kami Garcia's bestseller Sixteen Moons - An Immortal Love was made into a film. Directed by Richard LaGravenese (P.S. I Love You), Beautiful Creatures takes viewers to the Deep South of the U.S., where high school student Ethan (Alden Ehrenreich) unexpectedly finds himself immersed in a world of magic when he falls in love with his new classmate Lena (Alice Englert).

From the first moment, Ethan is intrigued by the mysterious Lena, convinced that she is the mysterious girl who has been haunting his dreams for several nights. Although Lena is extremely dismissive at first, Ethan doesn't let go. And indeed, a friendship soon develops between the two, which Lena's uncle, the landowner Macon Ravenwood (Jeremy Irons) does not like at all. For his niece surrounds a secret that could be very dangerous for Ethan. Lena comes from a family of casters and has supernatural powers. And now, on the verge of her sixteenth birthday, they may be spinning out of control. Because once Lena turns sixteen, it will be decided whether she goes over to the light, or the dark side of magic. And since there are forces that want to pull the girl to the dark side at any cost, that could end badly for those around Lena as well. So the best thing for Ethan to do would be to not fall in love with Lena. But it's already too late for that.

Beautiful Creatures obviously wants a piece of the big Twilight pie. That the makers have aimed their film at exactly the Bella & Edward target audience cannot be denied by any stretch of the imagination. But in some aspects Richard LaGravenese's film is quite different from the film adaptations of the books by Stephenie Meyer. For example, the story of Ethan and Lena is very self-deprecatingly staged, which gives the otherwise rather cheesy story a loosening wink that the Twilight films have lacked far too often. The handling of the subject of religious obsession is also presented in a refreshingly biting manner, which almost takes on satirical overtones in the film's best moments.

However, LaGravenese is very good at preventing his film from degenerating into a pure fantasy comedy. Rather, he presents a mixture of humor, romance and suspense, which seems absolutely coherent almost to the end. Only the finale is a bit too overloaded and lacks the lightness with which the production could convince until then. But that can be forgiven, especially since the movie doesn't annoy its viewers with a completely open ending, but tells its story in a self-contained way. Of course, the stage is set for potential sequels, as there are two more novels in the series. But Beautiful Creatures also works on its own, which is all the more positive since sequels are unlikely due to the rather meager box office returns in the U.S.

The two leads seem pleasantly unspent and deliver very charming performances. Newcomer Alice Englert in particular reveals a talent here that we're sure to see more of in the future. Together with professionals like Jeremy Irons and an extremely good-humoured Emma Thompson, the young actors ensure that Beautiful Creatures is also clearly superior to the Twilight films in terms of acting.

It is a shame that the fantasy romance has not found its audience in the USA. Because the magical southern world that is set up here, the likeable characters and the exciting as well as romantic story can entertain not only teenagers very well. The visual effects and the soundtrack are also absolutely successful. It may be that the self-deprecating and sometimes somewhat biting undertone does not go down well with the younger target audience or that Alden Ehrenreich does not have the languor factor of a Robert Pattinson. But purely from its entertainment value and cinematic qualities, Beautiful Creatures absolutely deserved to be at the top of the box office charts. And that's why I give it a clear: Worth seeing!