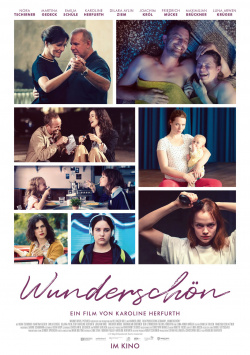 Always being perfect, functioning, conforming to a role model - that's something many people struggle with day after day. This is also the case for Sonja (Karoline Herfurth), who, after two pregnancies, no longer feels really comfortable in her body and is unhappy about being reduced by her husband Milan (Friedrich Mücke) only to the role of mother. Meanwhile, Milan's mother Frauke (Martina Gedeck) despairs of her husband Wolfi (Joachim Król), who has been completely demotivated since his retirement. She doesn't want to believe that the rest of her life should look so uneventful and gray. Her daughter Julie (Emilia Schüle), on the other hand, lives in her very own world, where she wants to finally make her breakthrough as a model. But this business is absolutely merciless. Teacher Vicky (Nora Tschirner) is also merciless when it comes to men. Fun? Yes! Relationship? No way. But then she meets her new colleague Franz (Maximilian Brückner), who would like to prove to her that relationships don't necessarily have to end in a breakup. And then there's schoolgirl Leyla (Dilara Aylin Ziem), who's tired of being an outsider and finally wants to find the courage to follow her real dreams....

"Wunderschön" is the now third directorial work of actress Karoline Herfurth, who transports here a quite important message: For a happy life, it is essential that you accept and love yourself as you are - with all your strengths and weaknesses. She provides examples of this in five different storylines, some of which are very different, and all of which work well on their own. As a whole, however, the film has to struggle with the problems typical of episodic films.

So the stories are often not told in a fully developed way, because there is simply not enough time. While Herfurth does take quite a bit of time in some of the storylines, other parts - like Leyla's story - end up coming up far too short. This also applies to the friendship between Julie and a little neighbor girl, which is touchingly told and well acted, but in the end somehow comes to nothing. Unfortunately, worn-out clichés are used again and again. While these are certainly anchored in reality, they could have been used a bit more subtly. For example, in the case of Sonja, who no longer wants to be just a mother. There in the children's books, which she reads to her small ones, only the traditional woman pictures are propagated - which in the reality quite still occurs, but for a long time no longer the rule is.

Small high points offer the history around Vicky and Franz, of which one would have seen here gladly still more. Perhaps it would have done the film overall good to tell two plot strands less and instead focus more on the remaining stories. As it is, "Wunderschön" is nice entertainment with some very strong moments, but also with many scenes that, lacking the time to elaborate, seem somehow inconsequential in the end. But since the film has its heart in the right place and the ensemble plays really well, the bottom line is a clear: worth seeing!

Cinema trailer for the movie "Beautiful (Deutschland 2021)"
Loading the player ...