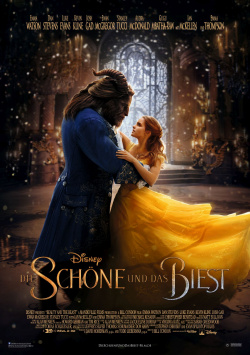 There are always classic materials that are so often adapted for cinema, television or the stage as a classic fairy tale, modernized version or as a musical that one has to wonder if there is really a need for yet another new version. One such material is the French folk tale Beauty and the Beast. The best-known version might be the multi-award-winning Disney animated film, which itself has been turned into a stage musical. Following the huge success of the live-action adaptations of the animated classics Cinderella and The Jungle Book, a new version of Disney's Beauty and the Beast is now coming to our cinemas. Unlike the other live-action adaptations, director Bill Condon makes little attempt here to wrest anything new from the beloved original.

So the story really only offers old familiar things: the rebellious Belle (Emma Watson) lives a quiet life with her father (Kevin Kline) in a small village. But when her father comes across a hidden castle on a trip and falls into the clutches of a beast (Dan Stevens) who lives there, Belle is ready to give up her previous life and give up her freedom for the life of her father. Henceforth, she is trapped in the enchanted castle. But then the unexpected happens: Belle befriends the beast and realizes that behind the scary facade beats a good heart. Little does she know, however, that time is running out for the Beast to become the human he once was.

Bill Condon's Beauty and the Beast is a feast for the eyes, that's undeniable. A great set, colorful effects, beautiful costumes - on this level, the film truly delivers. Even the songs, which with a few exceptions you already know from the animated film and the musical, still work very well after all these years. The actors are also well chosen, with Luke Evans in particular doing a really good job as the smarmy creep. Despite all these positive elements, the film fails to spark any real enthusiasm. That's because Bill Condon hasn't added any new facets of his own to either the story that's been told countless times or the specifically adapted Disney version. Unlike what Kenneth Branagh managed with Cinderella and even more so Jon Favreau with Jungle Book, Condon missed the chance to put his own stamp on his version of Jeane-Marie Leprice de Beaumont's fairy tale.

As well-crafted as the film may be, given its overly close proximity to the cartoon, one wonders if this real-life adaptation - a term to be taken with a grain of salt given the myriad CGI characters and effects - would have really been necessary. After all, since both films are nearly identical with minor restrictions, there's simply no way to avoid a direct comparison. And there, the new version simply comes off worse in terms of charm, wit and warmth than the lovable animated original. Is the film entertaining? Absolutely! Is it beautiful to look at? No question about it, yes! Is it fun? That too can only be answered with a yes. And yet, it is unfortunately one of those pointless remakes that misses every chance it gets to stand on its own. And that's why it's better to go for the original. For all Disney fans who just can't get enough of the beautiful story - no matter in which version - still: Worth seeing!

Cinema trailer for the movie "Beauty and the Beast (USA 2017)"
Loading the player ...