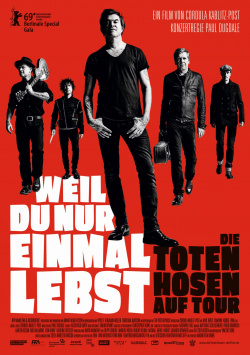 Because you only live once - Die Toten Hosen on tour

For almost four decades now, Die Toten Hosen have been setting the tone in German rock music. Formed in 1982, the Düsseldorf band is at times provocative and at times political, only to then again simply focus on having fun with life in their lyrics. After 36 years, Campino and his band mates perhaps don't get into trouble as often as they did at the beginning of their career. But of course they still don't let their mouths be shut. Again and again the Toten Hosen call attention to social grievances and stand up against racism. Many of their fans have followed the band faithfully for many years through all ups and downs. But not only on the fans, but also on the band members time does not pass without a trace. More than 19 million sold records can not save you from getting older.

Because you only live once - Die Toten Hosen on tour shows rousing and amazingly honest, how the band deals with it - especially when Campino has to cancel some concerts after a hearing loss. The filmmakers Paul Dugdale and Cordula Kablitz-Post have succeeded in making a great concert film, which primarily appeals to fans, but which also works for viewers who are not quite so familiar with the music of the Hosen. Because not only are the concert scenes filmed in such a rousing way that you are really infected by the good atmosphere in the halls, clubs and arenas. The moments that take place off stage also provide such an exciting insight into the tour action, so that it really doesn't matter whether you are a fan or not.

When you see the family atmosphere within the crew, when you hear from companions what the first gigs in small punk clubs were like or when you see what the music of the Toten Hosen means to the fans in Buenos Aires, it's interesting, stirring and definitely emotional. At the same time, the film also shows how normal our idols are when it comes to everyday worries, illnesses, social annoyances or even the inevitable aging. That Campino and his bandmates show themselves here from a partly less glamorous side, not only fits the image of the band, but also makes the gentlemen absolutely sympathetic.

Because you only live once - Die Toten Hosen on Tour is a great concert film, an exciting band biography and simply a really good film. And for this there is then also a deserved: Absolutely worth seeing!

Cinema trailer for the movie "Because you only live once - Die Toten Hosen on tour (Deutschland 2018)"
Loading the player ...