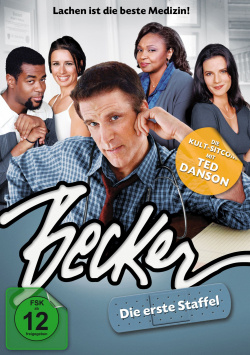 Content: Dr. John Becker (Ted Danson) is a doctor with heart and soul. Yet he is anything but a humanitarian. There is almost nothing and no one about whom Becker is not upset. Whether it's TV talk shows, noisy neighbors, cyclists, construction workers, incompetent waiters and, of course, his patients - the constantly annoyed doctor constantly has to vent his anger. And that's what Reggie (Terry Farrell), the new owner of his regular diner, and blind newsstand salesman Jake (Alex D&eacute;sert) get, who have learned over time to deal with Becker's moods. And even the resolute doctor's assistant Margaret (Hattie Wilson) can stand up to her boss, while the receptionist Linda (Shawnee Smith) meets Becker's rants with disarming naiveté.

After the end of the hit sitcom Cheers, Ted Danson had found another parade role in Becker in 1998. Instead of the charming womanizer Sam Malone he was allowed to give here for six seasons the lovable stink boot, to which political correctness is alien and who nags everyone first, if he has the opportunity. But in the end, Becker has his heart in the right place, which is what his patients appreciate so much about him. Not only is he able to set a stubborn diabetic straight with very clear words, but he is also able to explain to a little boy very empathetically what it means that he is infected with HIV. In moments like these, John Becker also grows very close to the viewers' hearts.

First and foremost, however, the series developed by David Hackel (The Highflyers, My Dear John) is very classic sitcom fare, especially in terms of character constellation. This becomes especially clear with the introduction of the somewhat dim-witted, but nevertheless very convinced of himself Bob (Saverio Guerra), who adds a character to the diner trio around Becker, Reggie and Jake, which until this episode had been very well-rehearsed, who at least at the beginning seems to serve only as a cue for some good laughs. Over time, however, Bob, much like Linda, develops into a likable character who is more than just a mere figure of fun.

However, Becker fails to achieve a similarly high cult factor as Cheers. To be sure, the main character certainly offers the potential to do so. But the supporting characters and the dramaturgy are too interchangeable and the series as a whole lacks a distinctive charm that has made similar sitcoms incomparably more successful and timeless. Nonetheless, the series is still really fun in its simple way over 17 years after its initial airing. There are many moments in which John Becker speaks from the hearts of his viewers, when he brings the pitfalls and annoyances of the normal city madness to the point. And at the latest, when at the end of the first season you long to hopefully be able to hold the second season in your hands as soon as possible, it becomes clear what addictive potential the doctor from Brooklyn still holds many years after his practice is already closed. And therefore applies to all lovers of classic sitcom fare: absolutely worth watching!

Picture + Sound: Here and there the picture seems a tiny bit washed out and in some faster camera pans a slight dragging effect is noticeable. Overall though, the picture is very clean, the overall sharpness is at a good level for a TV sitcom that is over fifteen years old and the colouring is also absolutely convincing, especially in the brighter moments. The Dolby Digital 2.0 mix is also decently mixed, with the very directionally mixed dialogue predominating the proceedings.

Extras: Apart from a brief animated image gallery on DVD 3, the box set has no extras to offer.

Conclusion: Becker was another parade role for Ted Danson after the end of the cult sitcom Cheers, which he got to play for six seasons after all. Seventeen years after its initial broadcast, the first episodes about the perpetually cantankerous doctor and his friends still offer plenty of good laughs and classic sitcom fare of the timeless kind. The DVD transfer of the first season is on a decent TV level, but you won't find any bonus material worth mentioning. Nevertheless, the series is just for sitcom fans worth watching enough to this DVD box a clear recommendation to be able to pronounce