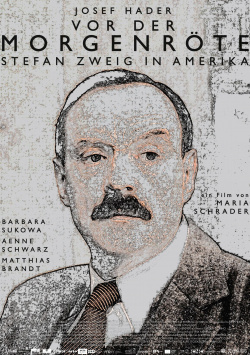 Before the dawn - Stefan Zweig in America

With his books, the Austrian writer Stefan Zweig (Josef Hader) has made it to world fame. But already in 1934 he is forced to leave his homeland to go into exile. Nevertheless, when he takes part in the P.E.N. Congress in Buenos Aires in 1936, he does not want to take a political stand. And even when he visits his first wife Friderike (Barbara Sukowa) in New York in 1941, he resists using his influence to help others escape the Nazis. But even when he finds a supposed paradise far from the war in Petr&oacute;polis and settles here with his second wife Lotte, he must realize that a sense of responsibility, guilt and suffering cannot simply be repressed.

With Before the Dawn - Stefan Zweig in America, Maria Schrader ventures into a rather difficult and ambitious undertaking. Using six episodes staged in real time from the last years of Stefan Zweig's life, she attempts not only to create a portrait of the writer, but also to tell a picture of the fall of Europe and a story of flight and a new homeland. On the one hand, this avoids the usual pitfalls of conventional biopics. On the other hand, a very multilayered and profound dramaturgy is created, which goes far beyond what the film superficially wants to tell.

With Josef Hader, Schrader has landed a real coup. Actually more subscribed to comedic roles, the actor and cabaret artist is able to inspire here with a very restrained, nuanced performance that perfectly reflects the inner conflict of Zweig. All of these are very strong arguments, which actually speak for the fact that Before Dawn has become quite great arthouse cinema. But that is unfortunately only partly the case. For as interesting as the approach is and as strong as Hader's acting may be, there is no denying that the production is extremely unwieldy, tough and exhausting.

This becomes clear right at the beginning, when the viewer has to watch for minutes as a table is set and the guests then take their seats at it, before a eulogy is then given to the guest of honour Stefan Zweig. It may be that a certain authenticity is achieved through this kind of real-time narration. But the patience of the viewers is always put to a damn hard test by such moments. For those who can't keep their full attention on the ball, most of the scenes will seem rather inconsequential and dragging. The overall picture, which is really interesting at its core and which is created by the interaction of the single snapshots, can't reveal itself then either. And if that's the case, then Before the Dawn isn't an intellectual treat, but just a really exhausting fight against boredom. Therefore: Only for really open-minded program cinema lovers and all who are interested in the last years from the life of Stefan Zweig, with small deductions worth seeing!

Cinema trailer for the movie "Before the dawn - Stefan Zweig in America (Deutschland/Österreich 2016)"
Loading the player ...