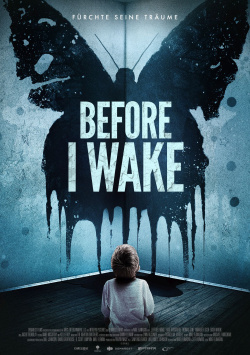 After the tragic death of their child, Jessie (Kate Bosworth) and Mark (Thomas Jane) decide to adopt a child. They choose eight-year-old Cody (Jacob Tremblay), who has not had a particularly good experience with foster care so far. The couple quickly take the boy to their hearts. They attribute the fact that he has trouble sleeping to his problems with previous foster homes. But they soon learn the real reason: Cody is afraid to fall asleep because his dreams are mysteriously manifesting. Jessie and Mark are shocked, but when Cody dreams about their son, they see the boy's abilities as a way to spend time with their child once again. But then Cody's dreams become increasingly dark and dangerous. Jessie and Mark must find out what's behind the nightmare if they don't want to fall victim to it too.

Director Mike Flanagan (Oculus) had long finished his mystery thriller Before I Wake before he set out to direct Ouija 2. But the solidly creepy sequel made it to theaters earlier. That's because the studio that produced Before I Wake went bankrupt before its release, so the flick disappeared into the archives for quite some time. This wasn't because of the quality of the film, which is absolutely solid for the genre. The wheel is not reinvented here and there are also some somewhat tough moments. But the way a miracle turns into an absolute nightmare for the grieving couple is quite excitingly realized.

Admittedly, it never actually gets really creepy. There are a few decent moments of suspense, but real goosebumps don't really arise. Still, Flanagan does a good job of building up a moody atmosphere that can at least give something akin to a comforting shiver. In this atmosphere the actors try to play against the numerous clichés and rather thin dialogues, which especially the little Jacob Tremblay and also Kate Bosworth succeed quite well.

Those expecting nothing more than solid genre entertainment will not be disappointed by Before I Wake. You have to be able to overlook the slightly cheesier moments and the conditionally convincing ending, but if you can, you'll get exactly what you'd expect from a decent mystery thriller for your admission money. However, if you were hoping for real scares or even solid nightmare horror, you will be bitterly disappointed. And that's why all in all: For rather squeamish fans of the eerie definitely worth seeing, for real horror fans, on the other hand, not really the right fare!