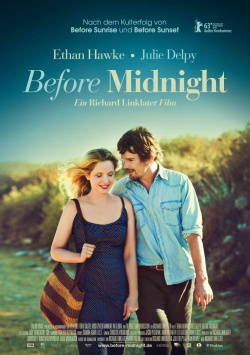 In 1995, aspiring director Richard Linklater traveled to Vienna with actors Ethan Hawke and Julie Delpy to shoot the small independent romance Before Sunrise for just $2.5 million. The film, which tells of a fateful encounter between the American Jesse and the Frenchwoman Celine, was a real surprise success, and not just with critics. Nevertheless, a sequel was not initially planned. It wasn't until nine years later that Linklater saw the time had come to revisit the popular couple. Then, in Before Sunset, viewers witnessed a reunion of Jesse and Celine in Paris that was every bit as successful as their first meeting. Now, again nine years later, the couple's story continues in a third film. Before Midnight stays true to the style of its predecessors. But little of the romance of their first meeting in Vienna seems to remain after 18 years.

Jesse (Ethan Hawke) and Celine (Julie Delpy) are still a couple and have two daughters together. Along with Jesse's son from his failed marriage, the small family spent an extended summer vacation in Greece. After Jesse says goodbye to his son at the airport with a heavy heart, he, Celine and the girls have one day left before they have to make the journey home to Paris themselves. A day in which Jesse and Celine find out, through long conversations and discussions, that they have little in common with the two lovers who met on the train 18 years ago. And even before it gets to midnight, they have to confront the question of whether their great romantic love of yesteryear even still exists.

Everyone probably knows this: something that still seems exciting, enchanting and endearing in the face of first infatuation and great romance can lose its appeal over time, due to everyday life and habit. Not only Jesse and Celine, but also the audience of Before Midnight have to make this experience. Richard Linklater and his two main actors have succeeded brilliantly in bringing this feeling of lost romance and extinguished passion to the screen. Whereas Jesse used to hang on his Celine's every word and found her manner simply wonderful back in Vienna, he is now simply annoyed by her endless barrage of words. And while Celine was once completely charmed by Jesse's poetic manner, she now finds it rather patronizing and pretentious. Again and again small sparks of the blazing fire of that time flash up. But real passion looks different.

As much as the actors, who also wrote or improvised the screenplay together with Linklater, deserve credit for allowing the viewer a very realistic look at a once great love far away from all Hollywood clichés, this is also exactly the biggest problem of Before Midnight. For those who know the first two films and have followed the romance between Jesse and Celine, this very consistent and unadorned sequel is certainly no less entertaining than its predecessors. For once again, there are some truly wonderful moments and biting dialogue that have been the charm of this series since 1995. But those who meet the American writer and the French musician here for the first time might quickly get annoyed by the sometimes quite hysterically delivered dialogue salvos. The big argument in the last third of the film in particular is hard to take, even for fans of the pair, due to its length and intensity. Newcomers, who have been severely tested several times by this scene anyway, are unlikely to be carried away by this part of the film.

As I said, Before Midnight is a consistent continuation of the style and story of the first two films. If you liked those and appreciate real-life relationship movies more than conflict-free Hollywood romances, you're guaranteed to enjoy a reunion with Jesse and Celine, despite a few moments that seem a bit tiring and inconsequential. But if you're hoping for a real feel-good movie with a bit of kitsch and a whole lot of warmth because of the picturesque backdrop and the romantic movie poster, your eyes might keep wandering from the screen towards the exit in despair after an hour at the latest. Therefore: only for fans of the series and for lovers of dialogue-heavy actor cinema recommendable!

Cinema trailer for the movie "Before Midnight (USA 2013)"
Loading the player ...