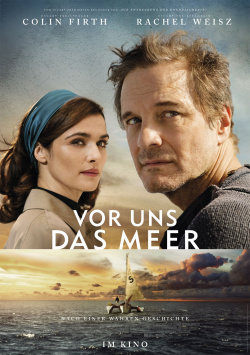 Before us the sea

Donald Crowhurst (Colin Firth) has high ambitions and many visions. Unfortunately, that's exactly why his small company is on the verge of going out of business. In order to still save it and save his family from poverty, it will take a small miracle. And that's what Donald hopes for with his entry in the 1968 Sunday Times Golden Globe Race. If he should succeed in being the person who sails around the world alone, without stopping and of course the fastest, the prize money offered would save his existence. There is only one problem: Donald is an amateur sailor who has never sailed the high seas. The perfect boat is supposed to compensate for this shortcoming, but that takes time and a lot of money. But with a lot of skill, persuasion and support from his wife Clare (Rachel Weisz), he plunges into the adventure with which he will make history.

Before Us the Sea tells the true story of a man who was willing to embark on a perilous journey around the world for the sake of his professional and family livelihood, but in the process powerfully overestimated not only his own abilities, but also his courage. It's a very tragic story that director James Marsh (The Discovery of Infinity) has made stirring and moving. As a viewer, you admire the courage of the ordinary man who, with his ingenuity and iron will, wants to make it against the professional sailors. You notice how he maneuvers himself more and more into a corner from which there is no escape. And this is exactly what gives the film its enormous tension.

For those who are not familiar with the story of Donald Crowhurst and its outcome, not much more should be revealed at this point. Only this much, perhaps: it was enormously important for the production that the audience realize the dilemma Crowhurst has gotten himself into and what is at stake for him - and especially for his family. It was the only way to make the ending at least somewhat comprehensible. It was also important that a strong actor was found for the lead role, as he has to carry the film alone for large parts. And Oscar winner Colin Firth does that extremely well.

With plenty of drama, a smattering of humour, some stunning imagery and strong performances, James Marsh charts one man's attempt to get his life back on track as it threatens to slip away from him, while simply refusing to see the dangers of doing so. An entertaining and gripping drama that more than deserves a clear worthy watch!

Cinema trailer for the movie "Before us the sea (Großbritannien 2018)"
Loading the player ...