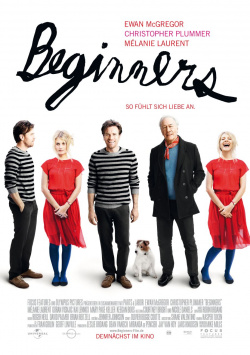 After the death of his mother, Oliver (Ewan McGregor) learns that his father Hal (Christopher Plummer) is gay. What he has suppressed for years, he lives out at the age of 75. Hal finds the love of his life in the much younger Andy (Goran Visnjic). But he can't enjoy his new happiness for long, because just a few years later he dies of cancer. Oliver is completely thrown off course by the death of his father. He has the feeling that he wants to start his life all over again, but he doesn't know how. When he meets actress Anna (Mélanie Laurent), he believes he has found the path to happiness. But change is sometimes harder than you think.

With Beginners, director Mike Mills (Thumbsucker) has delivered a very personal film. The outing of his father after the death of his mother and the will to change his life completely even in his old age had awakened all kinds of feelings in Mills, which he wanted to process in a screenplay after the death of his father from cancer, in the firm belief that he could create something universal out of his very intimate story. The fact that Mills put a lot of love and passion into the film is evident in every moment of Beginners. The film feels charmingly authentic and extremely emotional.

The initial reaction, not only from me but from many of my colleagues after the press screening, was: it's a beautiful film - I just can't put my finger on why. It's not the convoluted storytelling, which keeps moving back and forth between the burgeoning love between Oliver and Anna and Oliver's memories of his father, that gives the film its unique atmosphere. It's not the tender music or the wonderful script. Nor is it the great actors or the original way Oliver communicates with Arthur (Cosmo), his late father's dog. It's not the beautiful images cinematographer Kasper Tuxen has conjured up on screen. Rather, it's the combination of it all, done with a sensitive hand and a whole lot of heart, and the sense of new beginnings and new beginnings that the film conveys.

Not only does Beginners manage without even a hint of kitsch, the little film doesn't try to be strained different or quirky like so many other independent productions. There's a pleasant lightness to the production that comes through even in the sad moments with a life-affirming beauty. The very personal script, which mixes many of Mills' personal experiences and impressions with fictional moments, is brought to life by three great actors. Christopher Plummer may seem at first glance to deliver the most impressive performance in this. His performance is endearing, touching and truthful all at once. This is what Oscar-worthy performances look like. But Ewan McGregor's very understated performance is perhaps more understated, but no less impressive for that. McGregor takes himself completely back, lets himself be carried by the words of the script and thus offers one of his best performances ever. That the chemistry between him and the once again wonderful Mélanie Laurent (Inglourious Basterds, Don`t worry, I`m fine) is just the final icing on the cake, which makes this tragicomedy a particularly excellent piece of charming acting cinema.

Beginners may not be everyone`s cup of tea with its quiet, somewhat extravagant narrative form. Mill's film is just not mainstream fare, not mass-market popcorn cinema, but a small, very intimate gem of a film. Also, not everyone will be able to understand the praise I have given here. Because even if the film is objectively good, its emotional impact, which was very high for me, is a purely subjective matter. Nevertheless, it can be said with a clear conscience: if you like American independent cinema and hope to be touched emotionally in a rather unusual way in the cinema again, you should definitely not miss Beginners. Absolutely recommendable

Cinema trailer for the movie "Beginners (USA 2010)"
Loading the player ...