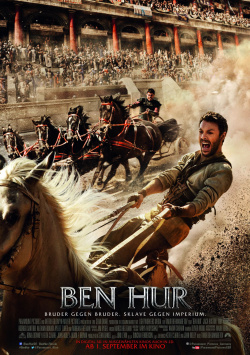 There are movies that almost everyone knows, even if you haven't actually seen them. William Wyler's 1959 Ben Hur, starring Charlton Heston, is one such film. The almost four-hour epic is part of the cultural history of the 20th century and is still one of the milestones of cinema history. Even though the ravages of time have taken a bit of a toll on the film, it's not just the legendary chariot race that still works amazingly well today. Nevertheless, Hollywood was convinced that it would be a good idea to revamp the classic and stage a remake, for which action specialist Timur Bekmambetov was allowed to take a seat in the director's chair. In the US, the remake was torn apart by critics and audiences were also less than enthusiastic. But is the film really so bad that this justifies the total flop at the American box office?

The story has remained unchanged at its core. However, the story, based on the novel by Carol Wallace, has been streamlined to a running time of just under two hours. It centers on wealthy Judah Ben Hur (Jack Huston), who is falsely accused of the assassination of Pontius Pilate (Pilou Asb&aelig;k) and, betrayed by his adopted brother Messala (Toby Kebbell), ends up as a slave in a Roman galley. In the years that follow, there is only one goal for Ben Hur: to survive to take revenge on Messala and to see the love of his life, Esther (Nazanin Boniadi), again. When he finally manages to return to Jerusalem, there is only one way for him to get freedom and justice. He must defeat Messala in a deadly chariot race.

The 2016 Ben Hur is nowhere near as bad as one might have feared based on the votes coming out of the US. But a really good movie this remake is not either, unfortunately. There are some very well-acted action scenes, such as the collision that leads to the sinking of the slave galley, or of course the chariot race, which boasts some spectacular 3D moments. But for every rousing moment, there are at least three extremely long-winded dialogue scenes, brimming with unintentional comedy. Even a seasoned mime like Morgan Freeman isn't strong enough to play against the script, which is brimming with clichés. Moreover, especially with the sporadic appearance of Jesus (Rodrigo Santoro), you get the feeling that the makers don't think their viewers are intelligent enough to get who the man is. For the less-than-subtle way Santoro is forced to recite familiar moments from the Bible here almost borders on the annoyingly ridiculous.

But that's not the biggest criticism Ben Hur has to contend with. For Bekmambetov in itself knows perfectly how to make his film look good, so that one could overlook some dramaturgical weaknesses. The real problem is rather that the film is in parts shockingly boring and extremely blandly staged. You just won't get carried away by the fate of the characters, as they are drawn in a way too one-dimensional way. Here was really saved at the wrong end and it remains to hope that Hollywood learns from such a flop. Because good effects and a little spectacle are not enough if the script and especially the main actors are lacking. Jack Huston may be a decent actor, but he lacks the necessary charisma. But he lacks the necessary charisma that his predecessor Charlton Heston radiated. Huston has no edges and thus seems extremely interchangeable - which is of course not exactly conducive to a hero epic like this.

Whoever hopes that this remake will be a great epic with lots of spectacle and high show values will be at least partially satisfied. Those who then also manage to look past the flat dialogue and the many clichés might actually be very well entertained. But if you also expect a bit more depth from the story and its characters, you will be bitterly disappointed. And that's why there is also only with great deductions just so a: Worth seeing!