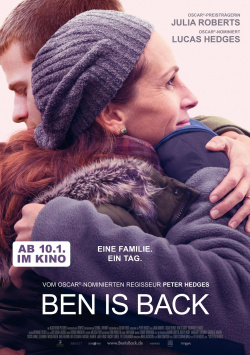 Actually, Holly (Julia Roberts) wants to be hugely excited that her 19-year-old son Ben (Lucas Hedges) is unexpectedly on her doorstep for Christmas. But there is also the fear. Because actually the drug-addicted Ben should be in a rehab. In addition, memories of last year's disastrous Christmas, as well as other disappointments, are still all too present, especially with Ben's sister Ivy (Kathryn Newton) and his stiff father Neal (Courtney B. Vance). But Holly refuses to give up on her son. She firmly believes he will make it and that this time, things will be better. All she has to do to make that happen is protect Ben from himself. But to do that, she'll have to rise above herself more than once in the next 24 hours.

With Ben is back, Peter Hedges has directed a stirring family drama that offers heavy fare, but is still touching and entertaining at the same time. Sure, the whole thing seems a bit contrived at times and scrapes very close to kitsch. But the great performances of Julia Roberts and Lucas Hedges alone prevent the whole thing from ever degenerating into tear-jerker pathos. At the same time, the director's sensitive staging prevents the audience from ever being completely dragged down, even in the most emotionally depressing scenes, and from having to leave the cinema frustrated at the end.

He also succeeds in this through the excellently drawn character of the mother, who is a good identification figure for the viewer. While the whole world seems to have come to terms with the fact that Ben is a junkie who will always lie, steal and have a destructive effect on those around him because of his addictions, Holly is not willing to stop fighting for her son. She's not in denial about his addiction and everything that comes with it. She just doesn't want to give up on him, as bad as the things she learns about him can be. How Julia Roberts plays this is just great and actually reason enough to buy a movie ticket for this drama.

Surely, light entertainment looks different. Ben is back is hard stuff, but served in a surprisingly digestible way. The ending is also particularly well done, actually leaving it up to the viewer to interpret it as hopeful or hopeless. But there is one thing the movie manages to do in any case: It never leaves its audience cold. A good film with really great actors and therefore also: Absolutely worth seeing!