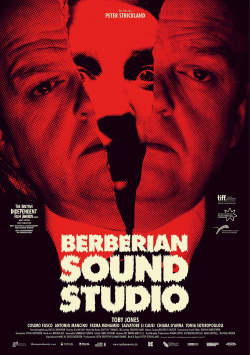 This is not how British sound designer Gilderoy (Toby Jones) imagined his new job at the Italian Berberian Sound Studio: already at the reception he is greeted in a less than friendly manner, the technical equipment is a bit outdated, the power keeps failing and the producer Francesco (Cosimo Fusco), with whom Gilderoy has to work, seems more interested in the dubbing actors than in the work. Moreover, the film by horror director Santini (Antonio Mancino), for which the Brit is supposed to create the right sound, proves to be extremely violent and disturbing. Gilderoy tries hard to maintain his professionalism and do his job as best he can. But the longer he stays involved with the film, the more he is drawn into its dark nightmare world - until, for him, the boundaries between reality and fiction slowly seem to dissolve.

Berberian Sound Studio is, at first glance, an atmospheric homage to the Italian giallo film of the 1970s, that blend of crime and horror that was characterized by a fairly explicit depiction of violence and sex by the standards of the time. As is usual with giallo, in Peter Strickland's second feature film the main character is also drawn into the dark events rather involuntarily. However, and this is what sets the film apart, Strickland completely refrains from showing the violence that Gilderoy is confronted with in his work. Rather, the cruelty of the work the sound designer must edit is expressed only through the effects produced in the sound studio and through Gilderoy's facial expressions, which are marked by revulsion and fear. This creates a very special atmosphere, which is magnificently underlined by the almost complete absence of natural lighting.

Like Gilderoy, the viewer feels alienated from this world, but at the same time is drawn to it in a fascinating way. Strickland manages to do this by always adding a bit of humor to the mystery elements of the story. For instance, while you wonder why the flight Gilderoy took to Italy didn't exist according to the accounting department, or what's up with the letters from his mother that act as a kind of bridge for him to his familiar world, the two Massimos provide some genuinely amusing moments when they maltreat melons to achieve the crudest possible sound effects.

Also a declaration of love for the work of sound designers in a pre-digital era, Berberian Sound Studio is full of quite wonderful moments. It's just fun to watch the characters at work. So, especially in the first hour, Peter Strickland has managed to create a really great work that, despite its chamber play-like character, is a real treat especially for fans of 70s horror cinema. But unfortunately, the good ideas end up going completely nowhere. Here, of course, it can be argued that Strickland has shifted the story to a level that requires the viewer to think completely abstractly in order to understand the meaning of the increasingly muddled events. Moreover, there can be a certain charm when not everything is chewed over and a certain ambiguity remains at the end. All arguments that are quite correct. But the problem is that Berberian Sound Studio doesn't present a real ending. The story simply runs in a void.

There's a lot to be interpreted into what happens in the final minutes, but the whole thing is a disturbing trip into the shallows of the human psyche - which, as any psychoanalyst will tell you, holds plenty of interpretive potential. Still, the whole thing comes across as if Strickland simply ran out of ideas here, as if he was simply overwhelmed with finding an adequate ending for what is in itself a great story. There will surely be viewers who will see the genius of the film in that very fact. But for most of them the initially engaging, exciting and also amusing visit to the Berberian Sound Studio will end with a bitter disappointment. And in the end, unfortunately, there is only one: only with significant deductions for lovers of the somewhat different horror film worth seeing!