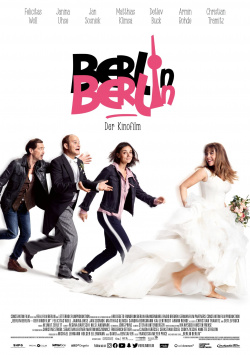 She just can't decide: Lolle (Felicitas Woll) is actually about to walk down the aisle with Hart (Matthias Klimsa). Together they run an animation company that is on the verge of a big deal with the USA. So their lives really do seem to be on track. But then Sven (Jan Sosniok) reappears on the scene and proposes to her just before they are to be married - and the chaos is back! And it takes on such proportions that Lolle ends up in front of a judge and is sentenced to community service at a school. Here she meets Dana (Janina Uhse), whose life seems to be at least as crazy as Lolle's once was. And that's not a good thing at all, because this clash inadvertently gets Lolle involved in an adventure that calls into question everything she's believed in for the past few years.

Berlin, Berlin was a real bright spot in the German series landscape in the early 2000s: witty, original and charming, the life and love chaos of Lolle was told, making the series celebrated by both critics and audiences. After four seasons, despite good ratings and various awards - including the International Emmy Award as the first German series - Lolle came to an end. 15 years later there is now a revival - and unfortunately it is a very sobering affair. Although not only some actors of the series are back, but with director Franziska Meyer Price and screenwriter David Safier two driving forces, which were significantly involved in the success of the ARD cult series, could be brought on board, little is left of the wit and especially of the charm of the series.

The story is flat and bristles with clichés. Since there is hardly any room for the new characters to develop in just under 80 minutes, they too remain one-dimensional, which also affects the credibility of the story. Because honestly: Would you make friends with a person who steals from you, drugs you, kidnaps you, spits in your face and insults you? Of course not, but here, of course, it's sold to us in such a way that Lolle somehow recognizes herself in Dana, who does exactly that to her, and also realizes that behind the outrageous facade is a person who is also so good. But seriously, not only is this not believable, it's not funny at all to boot.

This also goes for the completely over-the-top subplots that culminate in a finale that comes across as rushed, uncharitable, and clichéd. No, this is really miles away from the qualities of the series. Why the makers didn't manage to bring even a hint of wit and romance into the movie version and why the once so beloved characters are just annoying, remains a mystery to me and unfortunately confirms the widespread reservation against such reboots. Sometimes it really is better not to revive series (or movies) from the past that many people have such fond and positive memories of.

Berlin, Berlin - The film was supposed to be in theaters in March, but due to the Corona pandemic now landed directly on Netflix. A real loss for the badly battered cinema landscape is now really not. Many fans who were looking forward to a nice dose of nostalgia may be bitterly disappointed after the end of the film. At least: On Netflix there is now also the series to see - so better again purely!

Cinema trailer for the movie "Berlin, Berlin - The Movie (Deutschland 2020)"
Loading the player ...