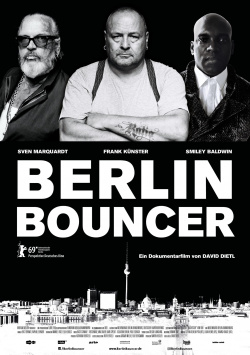 Who doesn't know them, the imposing figures who stand in front of the clubs in the evening and utter sentences like "You're not getting in here" in a continuous loop. Director David Dietl portrays three legendary bouncers of the capital in his documentary Berlin Bouncer and shows by their example how much the nightlife of the city has changed in recent decades. The film focuses on Frank Künster, who came from West Germany to a city where Smiley Baldwin was still guarding the border to East Berlin as an American G.I. and Sven Marquardt, a young East German punk and photographer, was suddenly surprised by the fall of the Berlin Wall. The three have very different stories, but have one thing in common: they all became part of Berlin's nightlife and regular institutions in the city's hottest clubs.

Berlin Bouncer is not only an extremely entertaining portrait of three really interesting guys, but also a rousing declaration of love for the capital's club culture. So it's a pure Berlin film? In principle yes, but you don't have to live (or have lived) in Berlin to be entertained and to find yourself here. Many of the stories told by Frank Künster, Smiley Baldwin and Sven Marquart are also familiar in a similar form from other big cities. In Frankfurt, for example, there have been enormous changes in recent decades, and here, too, there have been legendary clubs that have shaped nightlife and very special types that everyone who knew the scene knew.

But what ultimately makes the film so worth watching are the very personal stories of the three bouncers, who also speak quite openly about the dark side of their profession. They tell about everyday worries, but also about the fears that come with inevitable changes. This is sometimes very humorous, then again extremely emotional, sometimes shrill and then again gloomy, sometimes over-excited, then very grounded and extremely human. David Dietl has managed to make a film about three people that has become so much more than it might first seem.

So if you want to experience a very special trip through the Berlin club scene and also be reminded of your own experiences, this documentary can be warmly recommended. Absolutely worth seeing!