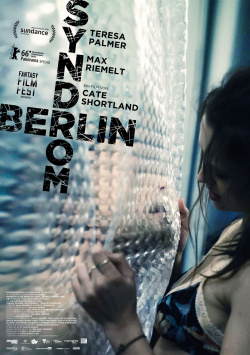 It should be a great adventure for the young Australian Clare (Teresa Palmer): Once as a backpacker travel alone through Europe, get to know other cultures and new people and thus expand their own horizons. That can only be a great experience. When she meets the charming English teacher Andi (Max Riemelt) in Berlin, the holiday takes an unexpected turn. The two immediately spark and they spend a passionate night together. When Clare wants to leave the apartment the next day, she discovers that Andi has locked her in. Of course, only an accident, as he assures her. But it soon turns out that Andi is lying and that he has no intention of letting Clare go again. For the young woman begins a nightmare from which there seems to be no escape.

Berlin Syndrome leaves you with mixed feelings. On the one hand, director Cate Shortland succeeds very well in building an extremely authentic atmosphere. By taking plenty of time to introduce Clare, to trace the lifestyle of young backpackers, and to paint a very engaging picture of Berlin, she's able to pull off the story's stark change of mood extremely effectively. The only problem is that even then she relies on a rather slow narrative style. This is very intense at times, but can also make for rather unnecessary lengths at some moments, due to which the occasionally nerve-wracking tension in particular is repeatedly thwarted.

This makes for some lengths and for the film not quite being able to leave the powerful impression that some scenes do. That aside, Berlin Syndrome is a really good and tense psychological thriller. Max Riemelt plays the outwardly very charming but inwardly completely disturbed psychopath frighteningly well. Teresa Palmer also delivers a very intense performance. Her acting and direction ensure that Clare never degenerates into a cliché character. She is neither weak victim, nor over-stylized fighter. Rather, she is a young woman who at times seems to surrender to her fate in a desperate and hopeless situation, only to take every opportunity she can to fight for her freedom.

The horror that ensues here takes place primarily on a psychological level. Every now and then, however, there are slightly bloodier moments that come across as unexpected and thus extremely effective. In short: despite the very quiet first act, which rather suggests a great romance, Berlin Syndrome is not for the faint of heart. A successful genre contribution with small weaknesses, which change little in the conclusion. Because that is quite clearly: worth seeing!