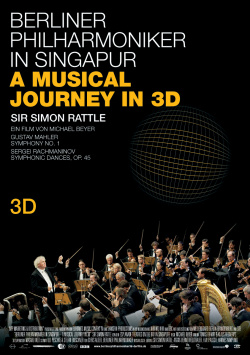 Berlin Philharmonic Orchestra in Singapore - A Musical Journey in 3D

When James Cameron revolutionized 3D cinema with Avatar, moviegoers were promised that this technology would no longer be used as a gimmick, but would be used to establish a completely new viewing experience. But after two years of 3D offensive, it can be said that in 90% of all cases 3D is still just a gimmick, often even unnecessary, which only marginally increases the enjoyment of the film and, apart from higher ticket prices, has no real added value to offer. But here and there filmmakers dare to experiment with 3D technology, showing that a three-dimensional cinema experience can be something very special indeed.

Berlin Philharmonic in Singapore - A Musical Journey in 3D is one such experiment. In itself, the whole thing is nothing special. The viewer is simply attending a performance by the Berlin Philharmonic Orchestra under the baton of the great Sir Simon Rattle, listening to Gustav Mahler's Symphony No. 1 and Sergei Rachmaninov's Symphonic Dances, Op. 45. What makes this film so special for classical music fans is that filmmaker Michael Beyer captured the concert with 3D cameras, transporting the viewer directly to the stage. He provides a very special view of the musicians' work, allowing the passion in Rattle's face to be felt through razor-sharp images. It is an intense concert experience that offers a real alternative, especially for those viewers who have not yet had the opportunity to experience the renowned orchestra live.

At the same time, the film also makes clear where the limitations of 3D technology lie. As much as you might feel like you're right in the middle of it, as vivid as the images are and as intense as the 3D effect is, even the most advanced technology can't imitate the live feeling of a real concert performance. You never forget that you are not sitting in a concert hall but in a cinema. The film is damn close to reality and offers an unusual perspective on the orchestra and the conductor, but still lacks that certain something that makes a concert visit so special.

However, Berliner Philharmoniker in Singapore - A Musical Journey in 3D is absolutely worth seeing for classical music lovers, as the concert film not only pays tribute to the music and the work of the orchestra in a very special way, but also because it becomes clear here that the possibilities of 3D are more versatile than one would like to believe with the current range of 3D films. So if you're looking for a concert experience of a different kind and can do without that special live feeling, this musical 3D experience can be warmly recommended.