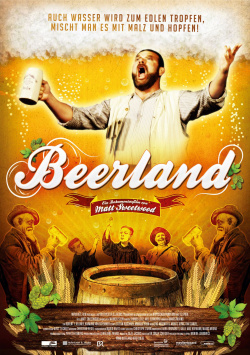 The American Matt Sweetwood, who lives in Germany, actually wanted to use his parents' visit to show them why the Germans love their beer so much. And which event would be better suited than the Munich Oktoberfest? But the trip becomes a real nightmare. First it takes ages for Matt and his parents to get anything to drink and then the joy of their beer is completely spoiled by intrusive drunks and overcrowded beer tents. It can't be that the Germans love that about their beer. Matt now wants to solve the secret of the beer culture of the Germans. And so he sets off on a journey across the whole country to find answers to the many questions that have plagued him since his visit to the Oktoberfest. He gets to know the Purity Law, finds out what beer brewing has to do with the invention of the refrigerator, witnesses the historic beer war in Upper Bavarian villages and takes part in a typical regular's table in his adopted city of Berlin. He visits the Bamberg region, which has the highest brewery density in the world, and learns how to drink beer properly. And at the Cologne Carnival he also discovers that you can drink your beer freehand. It's an adventurous journey, at the end of which Matt has to realize that there are many reasons why Germany is a real "Beerland"…

With his charming documentary "Beerland", Matt Sweetwood, who grew up in Missouri, Puritan, made much more than just a film about beer. The spectator will certainly learn interesting facts about the history of beer brewing and beer consumption, about brewing techniques and about rituals associated with beer drinking. But the Sweetwood at the end comes to the realization that it's not so much about how much or which beer you drink, but with whom you drink it, his film increasingly becomes a portrait of the Germans themselves. With a good portion of self-mockery, a few amusing animations and lots of everyday absurdities, the American paints a picture of the Germans that may confirm some common clichés, but which is generally very differentiated and above all always endearing.

One never has the feeling that Sweetwood looks down on the Germans and their sometimes very special pub culture. Some things he may not really be able to understand, but he is always fully involved, always takes his counterpart seriously and obviously really tries to get to the bottom of the Germans' preference for their beer. There are a few moments in which the filmmaker could have shown a justified arrogance. But even in such moments Sweetwood exercises restraint, maintains the position of the observer from the outside and leaves the rating to the viewer alone.

Thus "Beerland" never degenerates into a bitter satire about the Germans, but into a very amusing, surprising, charming and interesting documentary about their national drink. And so the following applies: Even for viewers who prefer limo to cool blonde, absolutely worth seeing!