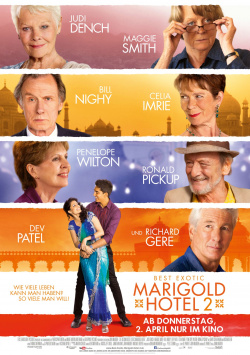 The Best Exotic Marigold Hotel in Jaipur is a resounding success after its teething problems. And so it's time to start thinking about expansion. While Sonny Kapoor (Dev Patel), with the help of Muriel (Maggie Smith), does everything he can to get hold of the perfect property for the Second Best Exotic Marigold Hotel, his permanent guests have their own problems to deal with: Evelyn (Judi Dench) gets a lucrative job offer, but she would turn it down in a heartbeat for Douglas (Bill Nighy). But he's just too shy to finally confess his true feelings to her. Madge (Celia Imrie), on the other hand, must choose between two suitors at once, which is nearly impossible for her. And the marriage of Norman (Ronald Pickup) and Carol (Diana Hardcastle) seems to have seen better days. So there's extreme emotional chaos at the hotel, which is heightened when newcomer Guy Chambers (Richard Gere) shows up. Sonny suspects the charming gentleman to be an influential hotel tester, to whom he naturally wants to offer paradise on earth. In the process, he completely loses sight of the needs of his lady of the heart, Sunaina (Tina Desai), and thus may soon lose a great deal more than just the possibility of expansion with his dream hotel...

After the charming story of a retiree's paradise in Jaipur turned out to be a real surprise hit in 2012, grossing more than ten times its rather low production cost of $10 million, the worthy sequel, Best Exotic Marigold Hotel 2, is now coming to cinemas. The location, the budget, the director, the screenwriter, the actors and even the composer of the score are the same as in part 1, so it's not surprising that the story has only changed marginally. There are of course some new developments and with Richard Gere, the already wonderful ensemble has been expanded by a top-class member. But on the whole, the film remains absolutely faithful to the style of its predecessor.

Now that may not sound like much of a compliment, but rather that director John Madden (Shakespeare in Love) has merely reheated the familiar with a few new ingredients. While that is certainly the case. Best Exotic Marigold Hotel 2 doesn't exactly score with ingenuity and originality. But since it was served up so tastily the first time around, the reheated version still tastes really good the second time around. The film is just extremely charming, with a well-balanced mix of British humour of the wonderfully dry kind and quieter, emotional scenes. The ingratiating, colourful imagery and the very simply constructed dramaturgy almost come across as a little fairytale-naïve. But at the same time, the story exudes an extremely life-affirming feel-good vibe that stays with the viewer long after the credits roll.

What the film probably benefits most from is its wonderful ensemble of actors. This is especially evident in the plotline involving Evelyn and Douglas due to the adorable chemistry that is felt between Bill Nighy and Judi Dench. They provide some of the film's finest moments, through which even the slightly too over-the-top scenes surrounding Sonny Kapoor's efforts to flatter the supposed hotel tester don't have too negative an effect on the overall impression. But also Maggie Smith, who again plays just a variation of her Downton Abbey character, is once again just great. Of course, her bitchiness, served with dry composure, is particularly amusing. But the grand dame also knows how to convince in her quieter moments. During her last scene, there should be more than a few viewers with a thick lump forming in their throats.

Best Exotic Marigold Hotel 2 is not sophisticated head cinema, but a light-hearted feel-good film that doesn't want to achieve anything more than to whisk its audience away from reality for two hours and put a smile on their faces. And even though the movie doesn't take any risks and doesn't offer much that's really new, it still accomplishes its mission quite well. And therefore, if you already liked Part 1, you should definitely check into Best Exotic Marigold Hotel again. And if you haven't seen the first film yet, but like light-hearted feel-good movies for the 50+ generation, you should quickly check out the DVD and then off to the cinema. It's worth it. Absolutely worth seeing