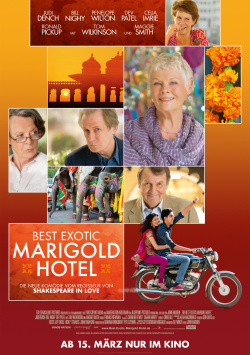 It is a dream for most people of retirement age to spend the rest of their lives in a truly paradisiacal environment, in a place tailored to their needs, where they do not have to forego any comfort. The new comedy "Best Exotic Marigold Hotel" by "Shakespeare in Love" director John Madden tells of such a place.

At least in its advertising, the hotel in Jaipur promises to be the perfect place for wealthy Brits to relax and free themselves from all the worries of their lives so far. And that's exactly what a group of first residents of the Best Exotic Marigold Hotel are planning: the recently widowed Evelyn (Judi Dench), who didn't get much more than a pile of debts from her late husband. The former judge Graham (Tom Wilkinson), who hopes to be able to continue his great happiness of the past. The couple Douglas (Bill Nighy) and Jean (Penelope Wilton), who seem to have very different ideas about their future lives. The beastly and highly racist Muriel (Maggie Smith), who wants to have a new hip inserted in Jaipur. And finally Norman (Ronald Pickup) and Madge (Celia Imrie), who also hope for a new love in the new country.

When this colourful group arrive in their new home, they are enthusiastically welcomed by its owner Sonny Kapoor (Dev Patel). But the hotel does not correspond so at all to the promised luxury property. Telephone and running water are a dream and even doors are not a matter of course. Food is also far from being good star cuisine. Shocked by the conditions in the hotel and shocked by the impressions that the foreign culture of India offers them, the days in Jaipur seem to be quickly numbered for most of the new arrivals. But when they become friends not only with each other but also with the country and its inhabitants, many of them start to see life with completely new eyes...

Admittedly, the story based on a novel by Deborah Moggach is not exactly filled with original ideas. Nevertheless, "Best Exotic Marigold Hotel" is a very big entertainment cinema, that mixes wonderfully funny moments with sensitive drama to a magical whole, for which the term "feel-good cinema" seems to be invented. First and foremost, of course, the film lives from its cast. Madden has gathered the who-is-who of British cinema in front of the camera here, with Judi Dench, Bill Nighy and Maggie Smith in particular once again offering lovably excellent performances. It's simply fun to watch this talented ensemble try to find their way through the colourful hustle and bustle of India in a cool British way.

Although there are a lot of humorous moments, the movie is much more than just a simple comedy for seniors. Rather, the film makes it clear that life doesn't necessarily have to end once you've reached a certain age. Many people then retreat into their safe and familiar terrain, following a rigid daily routine from which they rarely deviate. "Best Exotic Marigold Hotel" shows that it is possible to start anew even in old age, to find new friends, new happiness and to become part of a completely new culture. Surely, the whole thing is somewhat exaggerated here for the purpose of larger entertainment and is almost portrayed like a fairy tale. But at its core, the film contains a really nice and important message, which shouldn't only enchant older people.

If you want to dive into the colourful world of the "Best Exotic Marigold Hotel", if you want to be entertained by a wonderful ensemble of actors and an amusing and moving script or if you just want to spend two nice hours in the cinema, you should not miss this warm-hearted comedy.