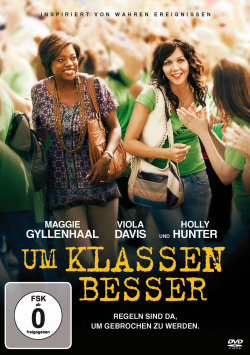 Movie: Jamie (Maggie Gyllenhaal) is desperate: the single mother is barely keeping herself and her daughter Malia (Emily Alyn Lind) afloat with her rather shabbily paid job. She can't afford a good school for her daughter, although Malia would need special attention due to a learning disability. She does not get this in her school. Both her teacher and the principal of the school (Bill Nunn) Jamie falls on deaf ears. She also doesn't get the scholarship she was hoping for at a prestigious private school. When she learns that if she gets the support of parents and some teachers, she can take over as principal of her daughter's school, provided she can convince the school board that the previous principal failed at her teaching job. Together with dedicated teacher Nona (Viola Davis), who wants the best possible education for her son Cody (Dante Brown), Jamie takes on the battle against authorities, stubborn parents and scared teachers. As she begins to show signs of success, the teachers' union, led by Evelyn Riske (Holly Hunter), fights back with a vengeance. But Jamie and Nona don't admit defeat that easily...

For Classes Better is a decent feel-good drama, but one that tells its story, inspired by true background, a little too pushily. Maggie Gyllenhaal's less-than-subtle and a little too up-tempo acting, which in some scenes seems to be limited to her acting with a grimace and wide-eyed expression, further supports this impression. Also the fact that pathos triumphs over emotion in the end tarnishes the overall impression a bit. All in all, however, the overall impression is still quite positive despite the weaknesses. Director Daniel Barnz, who didn't exactly cover himself with glory with his Beauty and the Beast variant Beastly, was able to gather some really strong female power in front of the camera for his new drama. Although Maggie Gyllenhaal is supposed to be the center of attention here, she keeps getting the show stolen by her co-stars Viola Davis and especially Holly Hunter. It's just fun to watch the good ensemble, which makes it easier eight to see past some of the dramaturgical flaws.

On a positive note, the story and its staging have their hearts in the right place. It may be that the film follows a clear pattern and has little to offer in the way of surprises. And it may also be that the characters are drawn very stereotypically. But what Barnz has to tell deals with a very current and important problem, which should definitely be discussed more, not only in the USA, but also in Germany. A good education is far too important to simply accept the failure of some educational institutions, politicians, but also parents. That it is worth fighting for children to be encouraged, to learn things that will give them a fair chance in a job market that is becoming more and more difficult, and that to achieve this, one must not only rely on the old tried and true, but must also sometimes break new ground, is a message that many more people should take to heart.

Besides its message, however, Around Classes Better still offers good entertainment as a strong women's film, enhanced with a smattering of humor, a dash of romance, and a few very emotional moments. If you don't mind that the staging is a bit cliché and a bit penetrating, you can safely risk a look. Therefore: not only for dedicated teachers and parents with small deductions worth seeing!

Picture + sound: Since only a data-reduced press sample was available for testing, no rating can be given here about the final image and sound quality.

Extras: Also the bonus material could not be sighted on the press DVD. Announced are Deleted Scenes, Interviews and an audio commentary by the director.

Conclusion: Classier is a superbly cast drama that delivers its idealistic message a bit too penetratingly. At its core, the film has its heart in the right place, but as director Daniel Barnz lashes his good ambitions at the audience with full force, much of the potential impact is lost under any amount of pathos. Maggie Gyllenhaal's not-so-subtle acting even supports this impression. Nevertheless: the good cast and some touching moments, paired with a little warm-hearted humor, make the film, which was inspired by true events, in the end still worth seeing with some deductions!