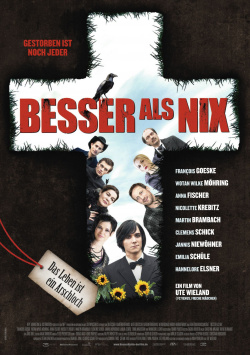 If you look up the word outsider in the dictionary, there should actually be a picture of Tom (Fran&ccedil;ois Goeske). At least the boy, who is always dressed in black and already visually forms a stark contrast to the rest of the village community, has the feeling that no one in this world can feel as alien as he does in this town, where in his opinion he is surrounded only by idiots. Even to Mike (Jannis Niewöhner), his best friend from childhood, he has no real connection anymore, since he is only occupied with cars and his girlfriend Maren (Emilia Schüle). And his father Carsten (Wotan Wilke Möhring) is also just a stranger to the 19-year-old boy since he only seems to live for football and alcohol after Tom's mother has left forever. When the boy then blows his last chance to graduate from school, he feels finally lost. But then the attractive and committed teacher Sarah (Anna Fischer) suddenly turns up at the careers advisory service and changes Tom's life in more ways than one. Not only does he believe that he has finally found someone who is on the same wavelength as him. She also gets him a training job. But is working for a funeral home really the right thing for Tom? Or will he only succeed in finding his place in life through the daily confrontation with death?

With the film adaptation of Nina Pourlak's novel Besser als nix (Better than Nothing), director Ute Wieland (Freche Mädchen) has taken a special risk. Because dealing with the subject of death can quickly degenerate into dreary consternation cinema or, if one approaches it rather humorously, into a tasteless farce. It is very difficult to strike the right note with this sensitive subject. Better than nothing tries the extremely difficult means of black humour and does really well with it in some moments. It's refreshing when German cinema tries to deal with a difficult topic in a more relaxed way and doesn't sacrifice every possible entertainment value for heady melancholy. For this alone, the makers of this coming-of-age story deserve a lot of praise and respect.

Also the actors do their best to convince in this very special story about the search for one's place in life. The as always charming Anna Fischer succeeds just as well as the currently very busy Jannis Niewöhner (Rubinrot, Doktorspiele) and a great Clemens Schick as a rockabilly undertaker with psychic abilities. Main actor Fran&ccedil;ois Goeske also plays very well, but he looks a bit too dressed up in his look to be really believable. And exactly here one of the problems of the production becomes clear: in some aspects too extreme clichés are used in the look or in the character drawing, which stands in strong contrast to the rather inappropriate humor of the film.

This creates a somewhat unbalanced, bumpy overall picture, which in turn has the consequence that the production does not seem loose and fluid, but a little tried. But that doesn't make Besser als nix a bad movie. There are just too many successful moments and very original ideas for that. But the film just doesn't do justice to the good intentions behind the story and its realization. The fact that some small supporting actors act rather amateurishly doesn't really help either. No question, Ute Wieland directed one of the most interesting German coming-of-age movies of the last years. Considering the good actors, the nice story and the sometimes very biting and surprising humor, it's just a pity that it didn't also become one of the best. And that's why there's only one here: Worth seeing with some reservations!

Cinema trailer for the movie "Better than nothing (Deutschland 2014)"
Loading the player ...