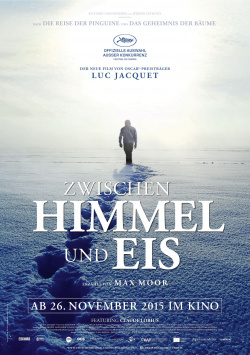 Between Sky and Ice

It all started with an ad: in 1955, young Claude Lorius responded to an ad to spend a year in Antarctica with two colleagues. This set the course for a life dominated by climate research. With his realization that the air bubbles trapped in the ice of the poles were preserved samples of the atmosphere from the time they were trapped, Lorius revolutionized climate research and, in the course of his work, made predictions, all of which, unfortunately, came true. Now, at over 80 years old, the French scientist looks back on his life and work in the place where it all began, and ventures a glimpse into the future - a glimpse that is unsettling, but not entirely hopeless.

Between Sky and Ice by Academy Award winner Luc Jacquet is far more than just another nature documentary. Of course, the film captivates with its wonderful landscape shots and its important message about our disastrous climate policies. Of course, the moral finger is raised several times here as well, and the warning that has been heard in so many other documentaries for it: If we don't act now, it's too late! But besides that, the film also has another level to offer, which make it an extremely exciting, interesting and stirring film.

This is achieved by the many archive shots, which Jacquet has not only edited together perfectly, but also dubbed first class. At moments here, you really forget you're watching a documentary, so gripping is the account of Lorius' earlier expeditions rendered. Whether it's the problems caused by drilling at extreme depths or dicey situations such as the explosion of an engine during transport from the research station, Zwischen Himmel und Eis almost feels like a great adventure film in its best moments, taking its viewers directly into the icy world of Antarctica.

A few small lengths and the occasionally annoying comments by narrator Max Moor tarnish the positive overall impression a little. But alone the audiovisual processing of the great archive material and the really exciting life story of the explorer make this documentary great cinema entertainment, which can unfold its full intensity on the big screen. And for this there is then a very clear: Absolutely recommendable!

Cinema trailer for the movie "Between Sky and Ice (Frankreich 2015)"
Loading the player ...