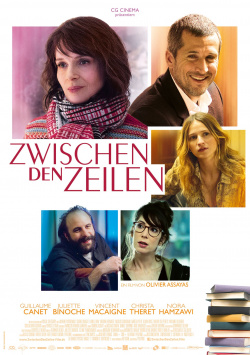 L&eacute;onard (Vincent Macaigne) used to be a really good writer. But it seems that time has long since passed. Now he writes novels in which he more or less obviously processes his own life and his love affairs. This not only brings unpleasant questions at readings. His publisher Alain (Guillaume Canet) is meanwhile also not very enthusiastic about L&eacute;onard's style and does not want to publish his latest manuscript at all. In addition, Alain has completely different problems: in his publishing house the digitalization mania is spreading and Alain, of all people, who still believes in the classic book, is supposed to help the attractive Laure (Christa Th&eacute;ret) to lead the publishing house into the future. Alain's wife Selena (Juliette Binoche), on the other hand, likes L&eacute;onard's latest book - perhaps because she finds herself in it. After all, she has been having an affair with the author of the lines for some time.

We live in a world that has always been in constant flux. Politics, culture, society, nature - hardly anywhere can permanent standstill be observed. Some of these changes are good and important, while others are more worrying. But all changes have one thing in common: you have to talk about them. And that's exactly what Olivier Assayas does in his new film Between the Lines. He focuses on the cultural and digital changes that are currently shaping our society and lets his protagonists discuss the pros and cons, sometimes bitingly, sometimes passionately. But it's about much more than just digitalization. It's also about the definition of concepts like truth, honesty and fidelity. You really don't have to read between the lines to see that.

The plot consists of several short snapshots in which different characters of the ensemble clash and exchange their points of view. For the most part, this is very clever and witty writing, while also provoking thought and discussion. However, it simply lacks a clearly discernible structure and a rousing story by which to hold all the amusing exchanges of words together. Sure, strictly speaking, there is a plot framework. However, this is so thinly constructed that the film would completely collapse without the support of the good dialogues.

Good actors, a relevant message and the wonderfully written dialogues - which have also been convincingly translated into German - make Between the Lines, despite some lengths and dramaturgical weaknesses, a film really worth seeing for lovers of French arthouse cinema. For everyone else, however, the almost two-hour-long battles of words might be a bit too exhausting in the long run.

Cinema trailer for the movie "Between the Lines (Frankreich 2018)"
Loading the player ...