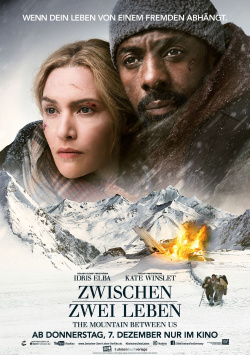 Between Two Lives - The Mountain Between Us

It seems like the perfect solution to a common problem: When all flights are cancelled due to weather, photographer Alex (Kate Winslet) and doctor Ben (Idris Elba) team up to charter a small private plane. Their pilot (Beau Bridges) is an old warhorse who isn't scared by an oncoming storm. But the best pilot is useless when he crashes over the mountains. Far from any civilization, the small plane crashes in the snowy mountains of Utah. Alex and Ben are just able to jump from the brink of death, but the chances of them being found in this wasteland are zero. So they must make a difficult decision: should they wait by the wreckage for rescue, or should they brave the dangerous path through the snowy wilderness?

Between Two Lives - The Mountain Between Us, the film adaptation of Charles Martin's novel, is actually perfect cinema material. A gripping adventure about an iron will to survive and a story about two complete strangers who are suddenly thrown into an extreme situation where they can only rely on each other. Shot against a breathtaking natural backdrop and featuring two top-notch actors, the premise really couldn't be better. Still, two-time Oscar-nominated director Hany Abu-Assad (Paradise now) hasn't hit the big time with this survival romance that this film could have been.

While it all starts out very promising. The first scenes between Kate Winslet and Idris Elba suggests a good chemistry that could well carry the film. The crash sequence is gripping and the moments when Alex and Ben are trying to come to terms with their situation are really engaging dramaturgically. When Ben then sets off to explore from a hilltop and Alex, meanwhile, is confronted by an uninvited visitor in the wreckage, there's real tension too - even if that scene feels a little overdone.

However, the longer the two struggle to survive, the more they have to fight not only cold and hunger, but also deep logic holes. These would all be forgivable, though, if the film's conclusion worked. And that's where the film's biggest weakness lies. I don't want to go into too much detail at this point, as that would give away the outcome of the story - even though there is no real surprise here. But this much can be said: Instead of stopping at the actually fitting ending, a way too long epilogue was added, which on the one hand doesn't really fit the mood of the movie and which then also drowns in unspeakable kitsch.

Yes, Cast Away also had such an epilogue. But this one is just much better and more consistently realized. This plodding finale, on the other hand, is unnecessary and ultimately ensures that all the weaknesses of the production and script become even more obvious to the viewer at the end. And that's a pity, because Between Two Lives - The Mountain Between Us not only has potential, the movie also exploits it very well in some scenes. But those scenes aren't enough in the end to turn decent cinema entertainment into very good ones. And that's why in the end it's only enough for one: Worth seeing with some reservations

Cinema trailer for the movie "Between Two Lives - The Mountain Between Us (USA 2017)"
Loading the player ...