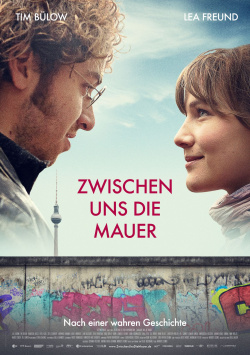 Between us the Wall

1986: For seventeen-year-old Anna (Lea Freund) from the West German provinces, it is almost an adventure when she travels with a youth group to an encounter meeting in East Berlin. At first glance, everything seems so different and somehow alienating - except for the pastor's son Philipp (Tim Bülow). Anna quickly feels drawn to his slightly rebellious nature. In the short time they spend together, the two quickly develop great feelings, but the wall stands in the way. But although Anna's parents (Franziska Weisz, Fritz Karl) don't like their daughter's love for a boy from the East and even forbid her to travel to Berlin, Anna takes every opportunity to secretly visit Philipp. But then the lovers make a mistake that could have drastic consequences for them both.

Between Us the Wall is based on the autobiographical novel by Katja Hildebrand. The multi-award-winning director Norbert Lechner (Tom und Hacke, Ente gut; Mädchen allein zu Hause, Toni Goldwascher) has transported this original in a rousing way to the screen. The result is a love story that comes across as simply authentic and beautiful without being too kitschy or clichéd. It is very helpful that almost all roles were cast with relatively unused faces. Especially Lea Freund and Tim Bülow play very naturally and exude a chemistry that makes their love story so believable.

Of course, this film is not completely free of clichés either. But Lechner succeeds very well in countering them with something surprising again and again. When Anna travels to East Berlin for the first time, the border guard corresponds exactly to the idea of the ice-cold, completely humorless and emotionless people, as one has already seen in countless films about the GDR. But in the course of the film Lechner builds just this a beautiful counterpoint, which is simply good and which shows that you should never lump all people together.

Between us the wall is perhaps not quite a great cinema film, but a wonderful love story that touches, which entertains very well and is also convincingly acted and atmospherically implemented. A really beautiful film that shows that love knows no boundaries. For this, there is clearly a: Absolutely worth seeing!

Cinema trailer for the movie "Between us the Wall (Deutschland 2019)"
Loading the player ...