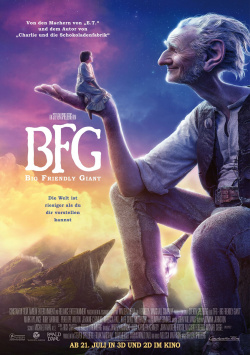 10-year-old orphan girl Sophie (Ruby Barnhill) doesn't like to follow rules, especially not when they're set by the nasty head of the London orphanage where she lives. And so one night she sneaks out to see what the world looks like while everyone is sleeping peacefully. Not a very good idea, because suddenly a giant (Mark Rylance) shows up and grabs the girl and takes her to the realm of the giants. While Sophie is lucky, she has fallen into the hands of a kind, gentle giant. But for the other giants who live here, the girl is just a tasty snack. But Sophie isn't the only one soon in serious danger, because if the giants discover there's a way into the human world, it could turn into a serious threat to all of humanity.

With BFG - Big Friendly Giant, Steven Spielberg has once again teamed up with screenwriter Melissa Mathison (E.T. - The Extra-Terrestrial), who sadly passed away in 2015, to once again tell his audience a fantastic story about an unlikely friendship. Only instead of being about a little boy and an alien, the story, based on a book by Roald Dahl, is about a little girl and a giant. There are other obvious parallels between the two films, though in the end BFG - Big Friendly Giant can't quite conjure up the kind of magic on screen that made E.T. so timelessly wonderful. This may be because it's too obvious that the giants and their world were primarily created on a computer. The look of the film feels very artificial, and as a result lacks the warmth of the old Spielberg tales.

While the whole thing is very playful and extremely charming. Some moments also clearly bear the masterful signature of Spielberg, who can execute such material like no other. But the igniting spark that turns good entertainment into a film to dream and wonder about is simply missing. Which is not to say that BFG - Big Friendly Giant is a mediocre or even bad film. Steven Spielberg has directed an entertaining children's adventure that at times has become very amusing, at other times moving or very exciting. Good actors and a few visually impressive moments also make for a very positive overall impression in the end. The grand finale, however, does a very good job of highlighting what the film's weakness is. The build-up is coherent, first-class staged, but the resolution comes across as unspectacular and a bit rushed.

And that's exactly the case for the film itself: there's a lot of well-established potential, but its execution lacks that special something. A film about giants, of all things, lacks the Spielbergian grandeur that transports the viewer into another, magical world in such a way that you completely forget that the characters aren't real - as was the case with E.T. just now. The alien was not a puppet, but for two hours of cinema a real being from another planet, which you immediately took into your heart. Although the BFG also grows on your heart, but he never seems real.

So BFG - Big Friendly Giant is nice, nice cinema entertainment, but unfortunately not a timeless masterpiece. If you want to lower your expectations a little bit and just be entertained in a fairy tale way, you shouldn't miss this journey to the land of the giants. Worth seeing