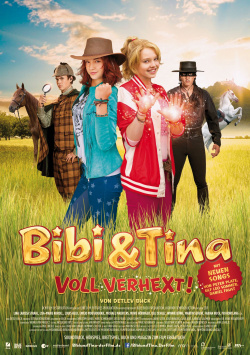 Hex Hex! Young witch Bibi Blocksberg (Lina Larissa Strahl) and her friend Tina (Lisa-Marie Koroll) ride into their next adventure just a few months after their first feature film. The two girls are just preparing for the big costume party at Falkenstein Castle when they learn from their friend Alex (Louis Held) that the place has been burgled. Not only have valuable paintings been stolen from the picture gallery, but the crooks have also snatched Count Falko's (Michael Maertens) beloved monocle collection. Although inspector Greta Müller (Mavie Hörbiger) immediately takes up the case, Alex is convinced that he'd better start looking for clues himself. But before Bibi and Tina can help him, the girls first have to advertise the horse farm, because not a single holiday guest has registered there so far. When their advertising campaign has an effect and the charming Tarik (Emilio Moutaoukkil) turns up at the riding school with his siblings, Bibi is immediately smitten with the boy. In her infatuation, she completely forgets that she wanted to help Tina and Alex solve the theft of Falkenstein Castle. It comes to an argument between the friends - and it is not exactly helpful that the clues that Tarik and his brother Ole (Ivo Kortlang) have something to do with the theft.

In March 2014, Bibi & Tina - The film could attract almost 1.1 million visitors in the cinemas. So of course a sequel was quickly decided. Bibi & Tina: Bewitched comes just ten months after the first part in the cinemas. The fact that there was hardly any time for preparations, which is clearly noticeable in the script, should not really surprise anyone. Therefore, you shouldn't expect anything more than a standard movie with an affinity to the target audience without any big surprises. The film closely follows the style of part 1 in almost all elements, which was very well received by the fans. There are horses, a girl friendship, song interludes, some romance, plenty of humor, and a touch of kid-friendly suspense.

There may be several reasons why the film didn't become an unbearable quick fix, but worked really well for its target audience. The catchy songs, for which Peter Plate (Rosenstolz) is responsible, among others, are just as much a part of it as the two charming leading actresses and the well-chosen supporting cast. Also prominent guest stars (whose identities will not be revealed here, of course) and the good camera work make for a very positive overall impression. But first and foremost it is thanks to Detlev Buck's light-hearted, often pleasantly ironic and playful staging that the concept still works really well in the second rehash.

Naturally, most viewers over 12 years of age will rather roll their eyes at the rather childish little jokes and also only very young Bibi & Tina fans are likely to be really enthusiastic about the musical numbers. But that's exactly who the film is made for. Buck has not directed a family film, but a children's film, which should especially inspire girls. And he does that very well indeed. Therefore, despite the - quite objectively - existing weaknesses at the end there is a very clear: Worth seeing!