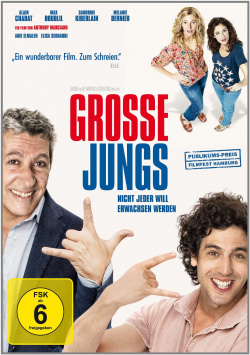 Film: For most of his 30-year life Thomas (Max Boublil) has dreamed of becoming a successful musician. But with the exception of a few engagements at weddings and birthday parties, the music career never really worked out. After proposing to his dream wife Lola (Mélanie Bernier) and finally meeting her parents Suzanne (Sandrine Kiberlain) and Gilbert (Alain Chabat), Thomas decides that the time has come to finally grow up. And so at his first meal together with his future parents-in-law, he opens the door for Lola to quit his dream and take a job at a debt collection company. While Lola and Suzanne are all over this romantic gesture, Gilbert is convinced that Thomas is making a big mistake. For Gilbert, bored by life and his marriage, marriage is the biggest mistake a man can make. And that's what he's dying to save Thomas from. From now on he never misses an opportunity to convince his daughter's fiancé of the advantages of bachelor life. The two of them have so much fun that grown men become big boys again, who are convinced that their wives are only in their way on the way to real happiness. But it is doubtful that they are right with this assessment...

With "Grosse Jungs" director Anthony Marciano presents a very amusing feature film debut, for which he wrote the script together with his buddy and leading actor Max Boubil. Even though the story isn't necessarily a prime example of originality and some jokes are a bit flat, the comedy as a whole is a lot of fun. It's often small details that are either very charming or enormously funny. An extremely imaginative marriage proposal is just as much a part of it as the reaction to a man with a headset in a neighboring car or a joint visit to a supermarket by Thomas and Gilbert. The film is peppered with numerous well-done laughs, which clearly show that Max Boubil is actually at home on the comedy stage. Especially during the wonderful finale at a nuclear conference, which is undoubtedly one of the funniest scenes in the film, the comedic talent of the author and main actor pays off perfectly.

A few nice side blows at the youth craze in the music business or at the superficialities of high society and amusing guest appearances of the music stars Patrick Bruel and Iggy Pop make the fun perfect. Surely, "Big Boys" doesn't offer fireworks of intellectual wit, it's not high-spirited entertainment, it's a very simply structured comedy. But since the movie never tries more than to give its audience pure pleasure for 90 minutes and manages to do so with the charming actors and several well done jokes, the whole thing works almost perfectly despite the small pendants. Anyone who likes simply gorgeous French comedy entertainment will love the "big boys". Absolutely worth seeing!

Picture + sound: The picture and sound quality of the DVD corresponds exactly to what can be expected from a current cinema production. The picture is absolutely clean, the colour scheme is harmonious and the contrasts are also on a good level. The Dolby Digital 5.1 Mix sound, as usual for the comedy genre, doesn't ignite a big surround firework. Dialogues and music are more in the foreground. But there is also always audible movement in the multi-channel range, which can create an overall very positive impression. Good!

Extras: As a bonus there is only a very short Making of (approx. 5 min.) beside the trailer and further program tips of the provider, which is qualitatively okay, but with 5 minutes simply too short to be really meaningful.

Fazit: "Grosse Jungs" is a charming comedy with only one goal: to entertain your audience during the 90 minutes of the show. And despite some weaker jokes, the film manages this very well. The good chemistry between the actors and some very amusing ideas make the feature film debut of Anthony Marciano a great pleasure, which is presented on the DVD in good picture and sound quality. But there is a very clear one: Recommendable!