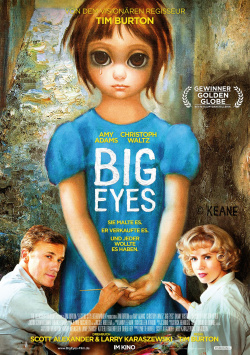 San Francisco in the 1960s: The paintings of Walter Keane (Christoph Waltz), which mainly show children with big, sad eyes, become a big seller. While the art scene condemns the works as kitsch and does not recognize Keane as a real artist, countless art prints, postcards and other merchandising of his works are sold and Keane becomes a millionaire. But what no one suspects: it was not Walter Keane who painted the pictures, but his wife Margaret (Amy Adams). She has let herself be persuaded by the charming sales genius Walter to act in the background while he does what he does best: Wrapping clients around his finger with his charms. But as the paintings become more successful and Walter basks in the glory, Margaret finds it harder and harder to continue living this lie. But her husband is not necessarily someone with a strong sense of justice. And certainly not someone who will let his success be taken away so easily...

With screenwriters Scott Alexander and Larry Karaszewski (Larry Flint - The Naked Truth), with whom director Tim Burton previously collaborated on his acclaimed biopic Ed Wood, he now tells another story in Big Eyes that is so unbelievable it can only be true. For their research, the two authors not only interviewed a number of contemporary witnesses and viewed a great deal of archive material. They also worked closely with Margaret Keane, who is now over 90 years old. For the artist, who still paints regularly, it was important that her story be retold as authentically as possible - with a few small dramaturgical liberties. These can be found primarily in Burton's characteristic humor of a somewhat quirky kind. Admittedly, the filmmaker takes it down a notch here compared to other of his films. But there are always some scenes in which the signature of Burton simply can not be denied.

This also applies to the fact that the film as a whole seems somewhat overstylized. This starts with the color scheme and culminates in Christoph Waltz's deliberately over-the-top acting. Both the scenes in which he first ensnares the single mother Margaret, then later his (potential) clientele, and such moments in which Walter shows his true, darker face, are not exactly marked by subtlety. But the way the two-time Oscar winner embodies the ruhmsüchtigen artist fits perfectly with Burton's staging, which is why it doesn't come across as distracting or unintentionally funny. Rather, it underscores the artificial nature of the film, which makes the already unbelievable story seem even more absurd.

Amy Adams plays her role appropriately much more restrained than Christoph Waltz, but is never completely overshadowed by him. Anyway, the entire ensemble harmonizes very well with each other, allowing each actor to play to their strengths very well. Especially Jason Schwartzman as an art dealer piqued by the success of the Keanes and Danny Huston can leave a lasting impression. Unlike many of his other films, Burton focuses less on whimsical sets and imaginative effects here and more on the characters. Thus, despite the Burton-typical imagery, Big Eyes is first and foremost one thing: extremely entertaining actor's cinema.

The story is not just about an art scandal or the question of whether the works of Margaret Keane are art or kitsch. It's also about a woman's struggle for recognition and independence at a time when emancipation was still in its infancy. Sure, the film doesn't reinvent the wheel and ultimately offers nothing that sticks in the mind long-term. But what makes Big Eyes so worth seeing in the end is the fact that Tim Burton tells this really great story in such an unagitated and restrained way and gives it, as well as all the actors, enough room to unfold. And for that there is a more than deserved: Worth seeing!