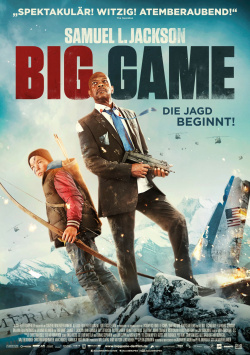 13-year-old Oskari (Onni Tommila) has a problem: according to the tradition of his Finnish village, he must spend a night alone in the forest, returning the next day with an animal he has killed. Only then will he be considered a man by his father and the rest of the village. Too bad Oskari isn't as good with a bow and arrow as he needs to be to kill an animal. But then something incredible happens: an escape pod hits near his night camp, containing none other than the American president (Samuel L. Jackson). He was dropped in the rescue pod over the Finnish woods after a terrorist attack on Air Force One. Now he needs Oskari's help to get to the nearest village. But not only is the boy less than enthusiastic about abandoning his mission for a man he's never heard of. What's more, terrorists led by the ruthless Hazar (Mehmet Kurtulus) have nipped at the heels of the unlikely duo. And while the US Army and the CIA are desperately searching for their president, the little boy must muster all his courage to save the most powerful man in the world...

With the anti-Christmas film Rare Exports, Finnish director Jalmari Helander has not only landed a small genre cult film, but also a surprise international success. So it's no wonder that the filmmaker not only got a bigger budget for his latest work Big Game, but was also able to hire international stars like Samuel L. Jackson, Jim Broadbent, Felicity Huffman and Ray Stevenson. The film was shot entirely in Bavaria, both in the picturesque mountains around Garmisch-Partenkirchen and at Bavaria Studios. And with Mehmet Kurtulus, a German actor was allowed to play the head villain. With a lot of flair of the 80s action cinema, a good portion of irony and atmospheric images, the turbulent hunt in the Finnish mountains has a pleasantly high entertainment factor, which, however, decreases a little towards the end.

Because while it is more than clear just at the first meeting of Oskari with the U.S. president that you should not take this film too seriously, this impression changes a little in the last third. Here it seems more and more as if Helander strings together a lot of common genre clichés without playing with them as he did before. The overdrawn characters and the logic-defying finale don't really seem amusing anymore, but unfortunately a bit silly. If you can take that with humor, too, you'll definitely have fun even in the rather weak moments. But even then it becomes clear that Jalmari Helander didn't succeed in exploiting the full potential of the movie, neither in terms of nostalgia, nor in terms of humor and action. A little more pace in places, a little more obvious wink and a little less pathos would have really done it good.

After all, Big Game is never really boring. Maybe a little tough here and there, but always sufficiently entertaining. Samuel L. Jackson in particular is fun to watch, and he really doesn't take his role or himself very seriously here. A little more of what makes Jackson's game so amusing, and the film would have definitely had the makings of a cult movie. As it is, the whole thing is a somewhat indecisive homage to 80s cinema and an appealingly filmed action-adventure with not always convincing special effects, but despite its flaws it still offers enough material for an enjoyable evening at the movies. And for that there is - with deductions in the B grade - still a satisfied: Worth seeing!