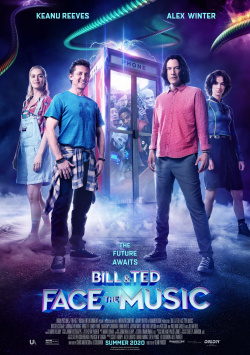 Hoschis, that we still get to see this: Bill and Ted, the zany heroes of the '80s cult comedy "Bill & Ted's madcap journey through time" and its not-so-granular sequel return after nearly thirty years! From time-traveling heroes William "Bill" S. Preston Esq. (Alex Winter) and Theodore "Ted" Logan (Keanu Reeves), however, have not become the rock music gods they should have. As a result, time and reality threaten to collapse in on themselves. Bill and Ted have just under two hours to compose the song they are supposed to use to bring harmony and unity to the universe. As the two Hoschis plot to steal this song from their future selves, their daughters (Samara Weaving, Brigette Lundy-Paine) travel through the past to drum up the ultimate band. But time is running out for them all.

There were always rumors that Keanu Reeves and Alex Winter would team up once again to travel through time as Bill and Ted. But somehow the wish seemed to be father of the thought. Not least because of Reeves' popularity, it seemed unlikely that he would once again present himself as a dorky wannabe rock star. But then it was announced that there was indeed a script and that financing was being lined up. And now it has actually come to fruition: "Bill & Ted Save the Universe" is here!

Quite clearly, if you don't know or don't particularly like the first two parts, you won't do much with this film either. The script, for which the original writers Chris Matheson and Ed Solomon are once again responsible, is nevertheless very clearly oriented by the humor of the predecessors. Director Dean Parisot, who already proved with "Galaxy Quest" that he understands fan cult, is also strongly oriented to the first part - including a really nice tribute to the unfortunately already deceased Rufus actor George Carlin. Finally, Keanu Reeves and Alex Winter play Bill and Ted as we know and love them: maybe a little older, but not really matured.

Surely, this late sequel isn't going to win any awards. You can tell the budget wasn't particularly big, and some of the gags are really arguably flat. Still, as fan service, it works really well. And at the latest when the end credits show how much music connects all kinds of people all over the world, it becomes clear that for all the clunkiness, the film also carries a very nice message that couldn't come at a better time. In a nutshell: "Bill & Ted Save the Universe" is a film that Keanu Reeves and Alex Winter wanted to make for the fans, who should have at least as much fun with it as the two leads obviously had with getting to step into these iconic roles once again. This film is nothing more - but nothing less either. And for that, there is quite deservedly a clear, Worth Seeing, Hoschis!

"Bill & Ted Save the Universe" is available now as a premium VOD on prime Video, iTunes and other providers.