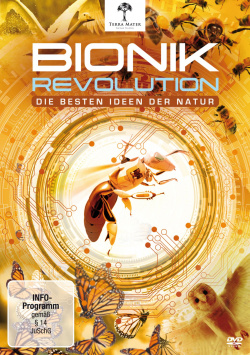 Movie: Incredible but true: the tactile hairs of a small shrew could be the model for a vehicle that steers itself. Elephants could help people rescue buried miners. Bats could teach even the blind to ride bicycles. Owls could revolutionize aviation. The rather unassuming horseshoe crabs bring new hope to people with paralysis. And giraffes could help pilots withstand extreme acceleration. Nature and the animal kingdom offer an enormous storehouse of knowledge that, if properly harnessed, could be of great benefit to humans. Bionics Revolution, a three-part documentary from the Terra Mater series, uses fascinating footage and interesting interviews to show where modern technology takes nature as a model, which revolutionary ideas can already be put into practice, and which are still possible visions for the future.

Divided into the chapters Perception, Extremes and Arms Race, the three episodes show that the solution to many technical problems can be found in nature. However, these are not always easy to copy. As simple as it seems to be that the structure of the scales on the wings of certain moths ensures that they are water-repellent, it is difficult to transfer this to clothing or artificially produced surfaces. Nor is it so easy to copy the complex network of tactile hairs that help rodents with poor eyesight create an accurate picture of their surroundings. A robot has already been developed that receives all its information via tactile hairs, but it does not move nearly as quickly and safely as its little models do.

It is very interesting to see where scientists get ideas for new developments and how important it is never to lose respect for the wonders of nature and to take them for granted. However, it is not so much the scientific research itself that is exciting, but rather the natural phenomena that underlie it. How, for example, elephants build up their very own social network with the help of sound waves over the ground, the monarch butterfly in Canada finds a specific piece of forest very specifically where it can overwinter with thousands and thousands of its conspecifics, or small ants can carry extremely large and heavy loads, is simply fascinating.

Thanks to the great shots of animals and nature, Bionik Revolution works not only as a science documentary, but just as excellently as a nature documentary. If you're interested in the many wonders our world has to offer and want to learn how humans can use the vast storehouse of knowledge nature provides, this three-part docu-series is a must-see. Worth watching!

Image + Sound: The nature and wildlife footage in particular features very high image sharpness and a coherent, powerful color scheme. Picture disturbances, soiling or major blurring are not detectable. The sound remains, as is not unusual for a documentary series, rather unspectacular and is primarily determined by the very centrally mixed voice-over commentaries. Since exactly these contain however also all important information, there is in this case also nothing to criticize. Good!

Extras: Bonus material has the DVD not to offer.

Conclusion: Bionics Revolution shows once again how fascinating the wonders of wildlife and nature are and how much we can learn from it. The three-part documentary from the Terra Mater series is exciting, amazing, and highly engaging. This does not necessarily apply to the work of the researchers, but primarily to their inspirations from nature. So it's easy to get over the fact that the technically well-executed DVD has no additional extras to offer. Recommendable